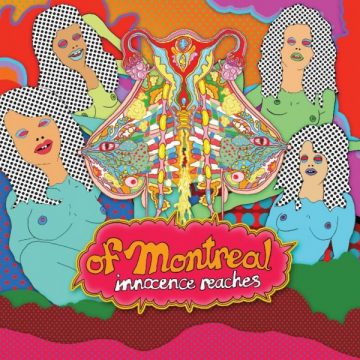 For the past 20 years, of Montreal has dabbled in every almost every genre imaginable, from Indie Pop to Glam Rock to R&B and even Country Rock. On their latest album, Innocence Reaches, we see the band combine nearly all of these genres with their signature Psychedelic Pop sound and, surprisingly, EDM. Inspired by modern electronic acts such Jack Ü and Arca, frontman Kevin Barnes locked himself in a friend’s studio in Paris for two weeks where he experimented exclusively with vintage synthesizers and drum machines.

The new electronic influence is quite noticeable and may be shocking for longtime of Montreal fans, especially since their previous record, Aureate Gloom, was mainly dominated by raw Post-Punk. Innocence Reaches, on the other hand, is anything but raw. It’s lush, dense, funky, and highly danceable. Tracks like “let’s relate,” “trashed exes” and “a sport and a pastime” are a perfect example of of Montreal’s new electronic experiments.

The album’s first single, “it’s different for girls,” blends Psychedelic Pop, Disco, and modern electronic music. If you’ve ever wondered what MGMT would sound like if they were produced by Nile Rodgers, this is as close as you’ll probably get. It’s undoubtedly the standout track on the album, not only because of its infectious grooves but also because of the brilliant and witty lyrics provided by Barnes.

Despite the modern soundscapes on the album, it also features many signature sounding of Montreal songs. Tracks like “gratuitous abysses” and “les chants de maldoror” show that they haven’t lost their ‘60s influence. The latter ends with a harsh Neil Young-esque guitar solo surrounded by lush tape flange. The combination of new and old on Innocence Reaches works to an extent, but it seems as if Barnes is having trouble deciding what kind of an album he really wants to make. Whether or not Barnes and company continue to make EDM-inspired albums is difficult to say. of Montreal has managed to puzzle critics and fans who have tried to pin them down to one genre, so chances are their next album will be another curve ball.

As a child growing up in the suburbs, Ryan found music as a way to soothe his boredom. After first hearing AC/DC at the age of 10, he was hooked on music. Tracing its roots to the ‘50s, he became obsessed with Elvis, Buddy Holly and Chuck Berry. Somehow that led to grunge, then psych-rock, then jazz, etc. The list goes on and on and his collection of vinyl records continues to grow.
RELATED ARTICLES
of montrealpolyvinyl records
8.0

by Anthony Pedroza on January 17, 2020
Of Montreal UR FUN Polyvinyl Records My first introduction to Of Montreal was a mixed CD with “Don’t Ask Me to Explain” blaring through my crappy car speakers. My second introduction to the band [...]
9.0

by Joel Weatherly on November 25, 2016
Various Artists Polyvinyl Plays Polyvinyl Polyvinyl Records Over the past 20 years, the independent music scene has changed significantly. Bands have come and gone and [...]

by James David Patrick on February 27, 2015
of Montreal Aureate Gloom Polyvinyl Records Another year, another of Montreal release. Another smattering of discord psychedelic-funk-glam-breakbeat tracks that fascinate and confound in equal [...]
2.5