8
new
SPILL NEW MUSIC: CARRÉ DEBUT SINGLE & PREMIERE VIDEO FOR “THIS IS NOT A BAND” | SELF-TITLED EP OUT NOW VIA NOMAD EEL RECORDS
SPILL FEATURE: THE SYSTEM OF JUSTICE IS BROKEN – A CONVERSATION WITH DAVID CLAYTON-THOMAS
SPILL MUSIC PREMIERE: MAYBELLEEN – “THE CLOCK”
SPILL VIDEO PREMIERE: CHARLIE WEBER – “JUNE”
SPILL VIDEO PREMIERE: ONE IN THE CHAMBER – “BLOW”
SPILL ALBUM REVIEW: LEE FIELDS – LET’S GET A GROOVE ON
SPILL FEATURE: THINGS WILL BE BETTER FARTHER ON DOWN THE LINE – A CONVERSATION WITH PACIFIC RANGE
SPILL FEATURE: HOW THE STRONG WILL SURVIVE – A CONVERSATION WITH DREW ARNOTT OF STRANGE ADVANCE
Album Reviews
128
previous article
SPILL TRACK OF THE DAY: GEORGE LOUKAS & JAKE CHEC - "CTRL"
next article
SPILL ALBUM REVIEW: STRFKR - BEING NO ONE, GOING NOWHERE 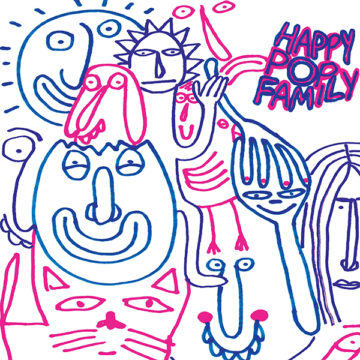 Happy Pop Family is a melodic and concise collection of songs dealing with everything from searching for shirts to screen-print on “Re:lease Life,” to isolation on tracks like “Aloha.” Within their lyrics lies relatability as they sing of hometowns and past loves. Core members Josh Salter and Seamus Dalton pair their vocals with jangly guitars and relaxed rhythms to create a sound that would be fitting on hipster-laden American beaches. Providing rhythm for this album we have multi-instrumentalist Scott Grundy of Heaven For Real who previously played with Salter and Dalton while touring with Nap Eyes. Bass is played by Andrew Mazerolle. Together along with producer Mike Wright they tracked Happy Pop Family in February of 2015.

Taken together, Happy Pop Family is a delightfully introspective collection of songs reminiscent of Wavves or even Dinosaur Jr. as they blend fuzzed and jangly guitars with laid-back vocals. Monomyth’s self-described “Bedroom Pop” is simple and straightforward yet entirely entangling.

I am an Edmonton based musicophile and photographer who loves experiencing music whether it's live or on my turntable. I play seven instruments and go to a lot of concerts.
RELATED ARTICLES
album reviewsalohamint records
7.0