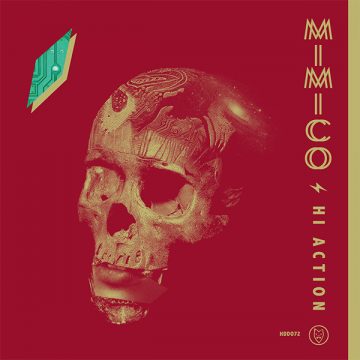 After four years, Mimico returns with their third album, Hi-Action, a six-track, forty-plus minute psychedelic sci-fi trip that is buoyed by the heavy use of vintage synthesizers to create pulsing, swirling, space beats, which are then decorated beautifully from song to song with ghostly violin, ringing, distorted guitar, and/or the occasional chorus of angelic voices all of which coheres into a fairly epic album.

The opening track “New Haze” opens with the sort of guitar strumming that sounds like it could be clipped from The War on Drugs, but then the pace seems to quicken and the synth space beats kick in and suddenly we’re launched into another territory completely as ghostly, distant voices pass by overhead in a track that, by the end, felt reminiscent in many ways to Pink Floyd’s Animals or Meddle albums.

The second track, “Common Tar”, is an urgent, pulsing, anxious song with guitar arcing through the background, and while all of the songs here could be the soundtrack to a film, this one in particular stands out. After the Stranger Things-like opening, I was left thinking that if I was ever on the run in some Orwellian cityscape that this would be the perfect song to play over it as the sweat broke out and I imagined myself pressed against a brick wall, my heart-racing.

The title-track “Hi-Action” is yet another epic, drum-heavy, swirl of sounds with beautiful shifts in pace and the return of those same angelic voices from earlier, along with streaks of violin, and at nearly nine minutes in length, there are plenty of melodic shifts and turns throughout.

The rest of the album follows suit and concludes with the nearly 10-minute track “Dreams Never Die”, which opens with more exotic-sounding violin and strings before the pace quickens yet again with steady drums and space beats, as well as jangly guitar scattered one strum at a time over it all. This was the brightest song of the album, and then suddenly the plug is pulled and each layer of sound quite literally drains away until there is only silence as the album concludes.

Overall, Mimico has created a fantastic, atmospheric album here, and I enjoyed listening to it immensely. While the comparisons to certain kinds of dreamy, spacey Pink Floyd songs are most apt in my mind, there are other positive comparisons to be made here to like-minded bands like Wooden Shjips or other representatives of the Krautrock style. The ability to build up tension and then shift or collapse into another sound within the same song provides a highly enjoyable listening experience from start to finish.

Dan Kennard is an English teacher and fiction writer living outside Kansas City, Kansas where he lives with his wife and children. More about his work can be found at amazon.com/author/dankennard. You can also follow him on Twitter and Instagram @kennardistry or contact him at kennardistry@gmail.com.
RELATED ARTICLES
album reviewalbum reviewshand drawn dracula
10