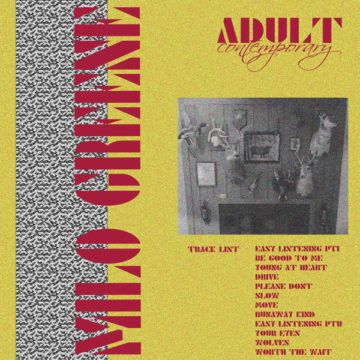 Milo Greene started out as an indie-folk four-piece, constantly switching instruments during their shows and blending their four unique voices into one hypnotizing, harmonic hush. Two records later and one member down, Milo Greene – the band named after a fake booking agent the members used to get them into venues – has clearly matured.

Not to say their first, self-titled album wasn’t a sign of things to come, but no one would ever expect the hand clapping behind “1957” to evolve into the synth clash of “Lie to Me”. In their rapidly changing dynamic, Milo Greene’s key characteristics stood resolute in the center. But the rapid move into ‘80s synth-pop on Control lost many of Milo’s folk-focused supporters.

So, when it comes to their third record, Milo Greene has no one to answer to. Adult Contemporary is, like all other Milo Greene albums, a reflection of exactly where the band is in this precise moment. It feels like a fresh start.

Certainly, this third album is the most diverse that Milo Greene has crafted. It’s the fact that adult contemporary is a category of music that encompasses several genres (leaving out hip-hop, hard rock and teen pop. Thanks, Alexa-like voice trapped inside “Easy Listening Pt. 1” and 2, who manages to make the album feel like an artifact found in the year 2078) that plays to all of Milo Greene’s strengths. When Arnett croons like Sting on “Be Good to Me” or when Sheetz channels disco with “Runaway Kind”, it feels familiar for various reasons. They are sounds that the band has always toyed with, but are more full-fledged here because each individual song gets its own chance to focus on one aspect of this myriad of influences. It’s clear the band is sticking to their old-school nostalgia/revival, but there is definitely more at play here both instrumentally and lyrically and it pays off when the songs can each stand out on their own.

In this sense, the music feels more free than it ever has. The epitome of this is on the muted “Your Eyes”, where the band goes Americana in the vein of The Civil Wars (who arguably gave Milo Greene a large number of fans when they toured together in 2011), or on “Slow” where a drum synth carries Arnett’s vocals to an explosive final chorus where all the members beautifully sing together. Milo certainly sounds best on Adult Contemporary when its members fold into one another’s voices (or, multiply into a chorus on the epic finisher “Worth the Wait”). It’s this signature of theirs that make tracks like “Please Don’t”, a sultry, cold note to a phantom love, and “Wolves”, a chanting warning of dedication, the album’s most memorable.

Overall, Adult Contemporary feels like a compilation of songs that reflect where Milo Greene has come from. The anthropomorphic man on the band’s debut cover has indeed grown up, gone out on his own, learned a few things, and tied them together to present himself as who he is now. Like sitting down with an old friend you haven’t seen in a few years, Adult Contemporary is reminiscent of the old band you once knew but now, they’re more confident, more mature, and undoubtedly more self-assured. It’s a place that most bands don’t ever find themselves, let alone after three records.

Robert Defina is an avid critic both on paper and in person. He spends more time writing album reviews than he does worrying about his future. He hopes that this sort of procrastination never grows old.
RELATED ARTICLES
adult contemporaryalbum reviewalbum reviews