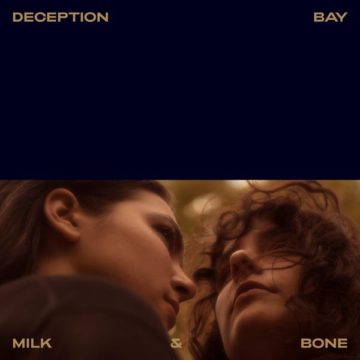 With shimmering synths, processed vocals, and the theme of relationships both good and bad, Deception Bay does not stray too far from the course that Little Mourning established. From the opening track, “Set in Stone,” straight through to the fourteenth, “:’),” things are pretty consistent. Most of the record packs the same brand of alternative pop that contemporary bands such as CHVCHES and Purity Ring have refined to an art form. This cohesion makes the album flow smoothly, yet also allows for some of the songs to get lost in the mix.

While many of Deception Bay’s songs feature danceable, upbeat instrumentation, a few songs do seek to alter this trend. “Tmrw.” is one of the album’s mellowest and most intimate tracks as the complex synths are stripped back to reveal a simple piano and oft-repeated chorus, “Let’s see what tomorrow brings,” that work in tandem to create a moody atmosphere that is suitable for a pop ballad. Immediately following “Tmrw.” is one of Deception Bay’s most experimental moments, “interlude I,” that expands the orchestral whooshes found in the former track to a fever pitch and allows for things to transition back towards synth-driven pop.

Within the title track, the duo’s carefully-constructed harmonies take on a new level of refinement as their layered voices meld with a roaring bass synth and detailed percussion to create one of the catchiest tunes on the album.

If Deception Bay proves one thing, it is that Milk & Bone is capable of consistency. The intricate musical textures and emotionally-influenced lyrics found throughout the album’s 48 minutes serve to restate that Montreal’s Milk & Bone is a power-synth tour de force.

I am an Edmonton based musicophile and photographer who loves experiencing music whether it's live or on my turntable. I play seven instruments and go to a lot of concerts.
RELATED ARTICLES
album reviewsmilk & bone
8.0