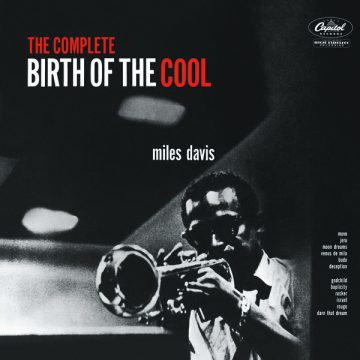 Miles Davis
The Complete Birth Of The Cool
Blue Note

If there is one word synonymous with Miles Davis, it would be cool. This, however, isn’t simply because the sheer presence of the jazz titan was objectively cooler than cool – ice cold – but also in part of Davis’ role as a pioneer of what we call cool jazz. This type of jazz would emerge in the late ‘40s to become incredibly popular throughout the ‘50s.

While Davis had played a pivotal role in numerous jazz cultural movements – bebop in the ‘40s and later electric jazz, jazz fusion, and avant-garde jazz – he was not among the pack when it came to the rise of popularity of cool jazz… he was leading it.

Most notably, his 1957 release, Birth of The Cool, featured a cast of soon-to-be jazz sensations: Gerry Mulligan, Lee Konitz, Max Roach, John Lewis, and Gil Evans. Now, over 70 years later, the 12 studio tracks (from the 1989 CD reissue) and 13 live tracks – capturing the only live recordings from this legendary ensemble – are being released together for the first time. Furthermore, the album is being reissued on vinyl for the first time since 1957.

The first half of The Complete Birth of The Cool follows through the original album. Remastered for vinyl, the warm, familiar tones of Birth of The Cool glide out of my speakers. Like greeting an old friend, the listener is quickly reminded with the opening notes of “Move” that Davis was a true artist, certainly among the greatest of the 21st century, and that Birth of The Cool was, and still is, an incredible album. While Birth of The Cool would spark Davis’ first renaissance, it would not reach the peaks that he would achieve within the next few years.

It is important to note that Davis was trying to reach a more mainstream audience when he started writing and recording in the cool jazz style. As a result, Birth of The Cool plays much like lounge music, making it a good place to start getting into jazz. It’s simple and melodic, often in rhythmic unison, while the musicianship stands as sophisticatedly superior. This is quite clear from the standout tracks: “Jeru,” “Deception,” “Godchild,” “Israel,” and “Darn That Dream” (as sung by Kenny Hagood).

Still, to this day, Birth of The Cool sounds as if it should be used as a soundtrack in every smoky lounge in need of a cinema noir tone. In other words, the vibe remains utterly and effortlessly cool.

The Complete Birth of The Cool comes full circle with the live portion of the remastered release. The band’s set – the only known set from this ensemble on record – largely consists of material from Birth of The Cool. It includes the previously mentioned “Move,” “Darn That Dream,” and “Godchild,” along with “Moon Dreams” and “Budo.” The set also features strong performances of “Why Do I Love You” and “S’il Vous Plaît” – both of which are very welcome additions to this collection. To say their performance is tight seems like an understatement. This truly was an all-star ensemble driven by an exceptional sense of musicianship and taste from all members involved.

All in all, The Complete Birth of The Cool is a needless reminder of the timelessness of Davis’ artistry and performance as a musician. While it offers nothing new to the already expansive set of live releases and studio material from Davis’ different chapters throughout his career, The Complete Birth of The Cool is as essential now as it was upon its initial release.

A passion for music has always been a part of Gerrod’s life. As a young boy, he was raised on a steady diet of the music from The Chili Peppers, Aerosmith, The Stones, Prince, and others from his mum. Raised in the GTA, Gerrod continued to foster his love for music by attending a wide range of concerts and learning the drums. His unapologetic passion for music has no bounds and has spread to a wide variety of styles, whether it be the 90’s rock that sound tracked his teenage years, the jazz he studied in university, or his newfound love for hip-hop. He recently received his bachelors in music and education from York University and is passionate about writing and reviewing good (and less than good) music. Gerrod is also the drummer and songwriter for a Toronto based rock & roll band, One In The Chamber.
RELATED ARTICLES
album reviewalbum reviewsmiles davis
7.0