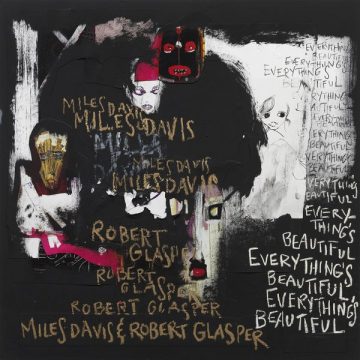 Being a fan of Miles Davis’ music, the period that I enjoyed the most was his classic period from the ‘50s to the ‘60s when he straddled Bebop, hard-Bop, Modal, Freebop and early Fusion. Miles was definitely an artist who kept looking forward, forgetting what lies behind in search of new expressions and new ways of doing things.

Upon hearing this tribute album, I give credit to Robert Glasper for reimagining and reconstructing Davis’ music and recordings for the 21st century as an intelligent exercise of creativity and interpretation. However, this project has me desiring that Glasper delve into the classic period more. Case in point: Davis’ Modal classics “Milestones” and “Right on Brotha,” interpolating Wayne Shorter’s “Nefertiti” by guest Stevie Wonder, are the only classic period elements brought into the mix.

This set will more likely appeal to the newer generation who wants a more intelligent approach toward the old and new. But for those who love Miles Davis and the rich body of work he provided, it would be best to stick to the originals as a way to remember him by.

Conrad Gayle is a jazz pianist, composer, and writer. He released three albums, "Genesis EP", "Foundations" and "The Live Sessions 09/10", his first book "The Real Conrad Black", has an active YouTube channel and maintains his own blog site called "The Conrad Gayle Review". He is a graduate from York University with a degree in sociology. He is also active in the city of Toronto as a solo artist and leader of his own trio, as well as being the regular pianist in his home church. He has written for the Spill Magazine for over four years and is planning on continuing the course to become a very successful writer.
RELATED ARTICLES
album reviewscolumbia recordsmiles davis
9.0