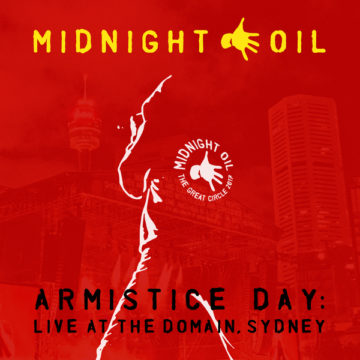 In February, 2017, Midnight Oil announced a world tour, their first tour in 15 years. The tour would eventually take in 16 countries over five continents, playing to thousands of fans. The tour ended in Sydney, Australia with shows at The Domain. This album (and DVD/Blu-ray) is the souvenir from that tour and the show in Sydney. This is not Midnight Oil’s first live album, it is actually their fourth, but it does have a very special quality and vibe to it, which differs from the other albums.Perhaps as it was a reunion.  It has been a while since their last studio album (2002’s Capricornia) so anything new from Midnight Oil is always welcomed.

For this tour, four out of the five original members reformed, the only member missing was Andrew James, but Bones Hillman, who replaced him on bass when he left, was back for this tour. Also back was: Peter Garrett (vocals; harmonica); Rob Hirst (drums, backing vocals); Jim Moginie (guitars, keyboards); and Martin Rotsey (guitars and backing vocals). Pretty much the perfect line-up. Jack Howard helped out with various instruments on the tour as well.

The concert was recorded on November 11, 2017 in Sydney, Armistice Day, so it stands to reason that it should be released near Remembrance Day. It does serve its purpose,a fine souvenir of that tour. Midnight Oil were on top form and this release clearly demonstrates just how good they can sound, live. Garrett’s voice is a little rougher, but that is fine, it adds to the overall sound of the recording.

The selection of songs is excellent. The obvious hits are here (“Beds Are Burning”; Blue Sky Mine”; “The Dead Heart”; and my favourite “Forgotten Years”), but they also go deep into their album catalog. The title track and “Redneck Wonderland”, for example, sound  much more energetic and urgent than on the original studio album released in 1998 (Redneck Wonderland).

But in the end, it is a live album, nothing extra special but a fine document of a band that deserves much more respect than it receives. Armistice Day: Live At The Domain, Sydney is a well recorded, well mixed album. This album is for the fans who attended, and those of us who could not catch them on their tour. I sincerely hope this means that a studio album is not far off in the distance, but in the meantime, this will do as it reminds us of what a brilliant band they are and the incredible songs they have written. Also a reminder of a band who were promoting social justice long before the term existed.

Born and raised in Whitby, Aaron discovered music through his love of The Beatles. This led to a career in radio, writing for various publications, and ultimately a radio show about The Beatles (Beatles Universe), which ran for over four years. When not immersed in music, Aaron enjoys spending time with the loves of his life -- his wife Andrea, and daughters Emily and Linda (all of whom have an intense love of music too).
RELATED ARTICLES
album reviewalbum reviewsmidnight oil
10