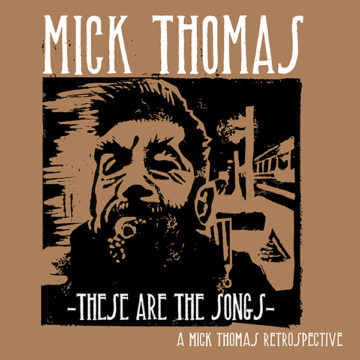 Mick Thomas
These Are The Songs: A Mick Thomas Retrospective
Liberation Music

When I attended University of Ottawa, I had a radio show, every Saturday night, midnight to six, on the University station.  If you tuned in, you were guaranteed a blend of music that included weekly spins of Beatles, Smiths and Weddings, Parties, Anything or Mick Thomas solo.  I have lost count how many times I have seen him live, so I guess you could say I was and still am a fan.

I was so happy this year to discover that Thomas has not only written a book, but decided to assemble a compilation of his post Weddings career.  This set, These Are The Songs, picks up where Trophy NIght leaves off.  Trophy Night was a brilliant retrospective of Weddings, Parties, Anything, whereas These Are The Songs dips into Thomas’s extensive solo catalog.  It also serves as a companion piece to the book These Are The Days – Stories and Songs.

This is an opportunity for people to catch up on what they have missed over the past two decades.  Whether solo, or with one of  his bands (The Sure Thing and the Roving Commission), Thomas has written some of the most heartbreaking and achingly beautiful songs recorded in the past thirty years.  He tells stories of people, famous (“Maltby By-Pass”, a song about The Highwaymen in Australia) and not so famous people (“The Lonely Goth” as just one example).  Thomas creates stories that are sympathetic, non-judging, just classic storytelling.

His music, since leaving Weddings is more acoustic, almost country at times (check out his cover version of “Most of The Time”, which features Ruby Boots, they turn Dylan’s plaintive song into  bluegrass duet).   Rounding out the set are four new songs, actually covers, but new songs.  Thomas is no stranger to covers, his last few singles have featured covers, and one cannot help but think (hope) this is acting as a clearinghouse of sorts and we can expect some new songs shortly.  The covers are are interesting and a little obvious choices.  The songs are nicely arranged (his take on The Kinks “I’ll Remember” from their 1966 Face To Face is clearly the best cover in the set) but also very telling.  He takes a stab at Rick Nelson’s famous “rant” “Garden Party” about an audience at Madison Square Gardens not wanting to hear his (Nelson’s) new songs.  One cannot help but think that this is a clear message from Thomas about the reception his post Weddings songs have received.

But Thomas should not worry.  Maybe he does not top the charts, but these songs will stand the test of time.  These are modern day folk songs that burrow under your skin and stay there.  Long after the CD has stopped spinning, the stories and music stay in your head.  My one complaint about the album is that it is not yet available on vinyl, as these songs cry out for it (his latest four singles were released on vinyl and download).

The songs are arranged in almost chronological order, which allows the listener to hear Thomas grow as a writer, artist and singer.  In this day and age it is refreshing to see an artist grow and like Dylan, McCartney, Cash and so many more his history and his experience has lead him to the point of being an observant, creative, and essential artist.  The world needs people like Thomas to write and document in such a loving and sensitive way.  This is a wonderful compilation album that represents a wonderful career.

Here's what we think...
Spill Rating
Fan Rating
Rate Here
New Criteria
10
8.5
8.0
Total Spill Rating
8.5
Total Fan Rating
You have rated this
Album Reviews
album reviewsforgot she was beautifulliberation musicmick thomasselling the cool carthese are the days: stories and songsthese are the songs: a mick thomas retrospectiveweddings parties anythingyou remind me
album reviews, forgot she was beautiful, liberation music, mick thomas, selling the cool car, these are the days: stories and songs, these are the songs: a mick thomas retrospective, weddings parties anything, you remind me
About the Author
Aaron Badgley

Born and raised in Whitby, Aaron discovered music through his love of The Beatles. This led to a career in radio, writing for various publications, and ultimately a radio show about The Beatles (Beatles Universe), which ran for over four years. When not immersed in music, Aaron enjoys spending time with the loves of his life -- his wife Andrea, and daughters Emily and Linda (all of whom have an intense love of music too).
RELATED ARTICLES
album reviewsmick thomasthese are the days: stories and songs
9.0