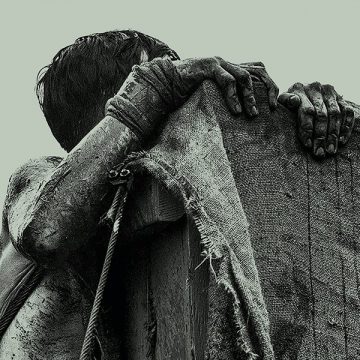 “I woke up to hear the dial tone/And the sound gets stuck between my teeth”, utters Alex Edkins in “Pulse”,  the opening track of Atlas Vending, the long-awaited fourth full-length from METZ. Those words, along with Hayden Menzies pulsing bass drum, create a blare that you can almost feel in your chest the first time you hear it. With the added rumble of Chris Slorach’s bass in the mix, the band is preparing you for what is some of their most well-written and carefully crafted songs to date.

Next, “Blind Youth Industrial Park” and “The Mirror” get the album going in proper METZ fashion. These songs deliver everything you’ve come to expect from the band while still staying fresh. On “The Mirror”, the band really does a good job of building the song to a whirlwind of beautiful chaos where Edkins’ vocals somehow add to the chaos and calm it at the same time, in what is definitely one of the standout moments on the record.

Near the midpoint on “No ceiling” the album hits its bottom. The song is short and drenched in distortion, but offers very little other than a breather from the longer songs that come before and after it. Maybe that was the band’s intent, but it feels underdeveloped and unnecessary on an otherwise exceptional record.

From here on out Atlas Vending is persistent and relentless, with “Draw Us In” being one of the highlights with its eerie guitars and Menzies’ uncanny ability to complement them. The band really flexes its melodic capabilities in ways we’ve never heard before on “Framed by The Comet’s Tail” and “A Boat to Drown In” which brings the album to a numbing climax that sits with you long after you’ve heard it.

To put it simply, METZ is doing what it does best, not overthinking anything and progressing naturally as a band. The result is a beautifully crafted record that touches on all kinds of relevant themes and leads to some peaks that the band have never reached before.

Where would I be without music? Somewhere I don’t want to be. Loves photography, skateboarding, stand-up comedy and Gaspar Noe movies. Full time student.
RELATED ARTICLES
album reviewalbum reviewsmetz
10