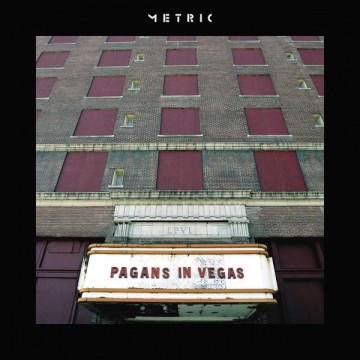 Metric’s sixth studio album sounds very modern and fresh, staying true to the band’s goal of capturing “the romance of another time without falling into nostalgia.” They certainly achieved that goal with Pagans In Vegas, released late last year. According to their press release, the new album is a conscious effort by the band to make connections with artists who have inspired them, while at the same time avoiding getting stagnant. Some of those who have inspired them include Joy Division, Underworld, and the ‘80s giants, Depeche Mode.

The primary example of this romance of another time can be seen in the cover art. The cover is a photograph of the Memphis hotel The Chisca. It was the hotel that held the first ever Elvis Presley broadcast interview and Metric loves the King. It seems they have always loved making references and crafting connection to great musical legends. They consistently do this through their lyrics, their sound, and now their cover art.

Pagans In Vegas is a very good album, and a good indication of what is yet to come. It is a synthetic and acoustic exploration and juxtaposition of themes of hardships and the joy of living.

This is the first of two albums. It is the fore-runner of its younger sibling that will arrive sometime in 2016.

Lots of things happened while the world wasn’t watching. Guitarist James Shaw had been diligently working with his CS80 synthesizer at his Toronto studio for more than two years. At the same time, vocalist Emily Haines drew inspiration through solitude by living her life in Nicaragua and Spain. While immersed in new cultures she explored her softer side through various acoustic instruments. Together they composed an abundance of music, which is why they decided to let the two collections stand on their own.

There is nothing groundbreaking here, but that is in no way a criticism. Pagans in Vegas is a good rock/synth album. You don’t get a chance to release six studio albums by fumbling through the process. Haines’ voice is as captivating as ever.

The first few songs are full of energy and foot-tapping melodies. The middle forgoes the seductive melodies and exchanges them for thought-provoking lyrics. The album concludes with the latest single “The Governess,” and leaves fans with a promise of things to come. “The Face” is a very pleasant instrumental surprise. It is a track divided into two parts, both unique and captivating in their own right. There is something special about both of these instrumental pieces and are definitely worth a listen. The best track is “Fortunes.” It has that vibe and feel of a stadium. It will stay on the Metric set list and be a fan favourite for years to come.

Pagans In Vegas will definitely whet your synth appetite and prepare you for the second coming in 2016. Meanwhile, the North American tour starts on February 12 at the House of Blues. The show is already sold out, so don’t hold your breath for tickets. Metric lands at the Air Canada Centre on March 23

Grzegorz Kieszkowski originally hails from Bydgoszcz, Poland. After his father was released from prison in 1984, for his involvement with the Solidarity movement, Greg and his family escaped to Canada in 1985. He makes Cobourg his home, along with his wife and two small children. Greg is a graduate of York University, with a double major in English and Philosophy. Music has always been in his blood, and although his tastes have matured, he will always have a soft spot for the Metal days of the late 1980’s. He is a full time English teacher and a professional photographer. Part of the allure of writing is the possibility of conversation, and he would love to hear your comments and opinions. Please feel free to visit his personal website - grzegorzkieszkowski.com.
RELATED ARTICLES
album reviewsmetricpagans in vegas
7.0