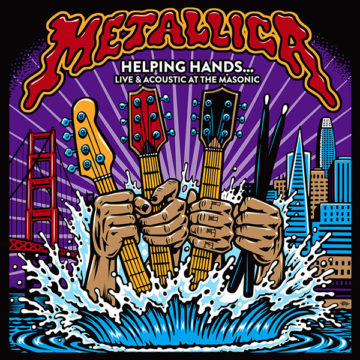 Metallica seems to be in a sort of career Renaissance. Its latest studio album, 2016’s Hardwired… to Self-Destruct, has been heralded as the band’s strongest release since 1991’s Metallica/The Black Album by fans and critics alike, while the incredible and seemingly endless WorldWired Tour continues. Most recently, Metallica has released Helping Hands… Live & Acoustic at the Masonic, recorded at last year’s November 3 concert at San Francisco’s Masonic Auditorium. The show was a fundraiser for Metallica’s All Within My Hands Foundation, which supports local charities wherever the band performs, donating $10,000 to local food banks after each WorldWired show, as well as helping financially underprivileged students pay for post-secondary education. As the title suggests, the record is not only live, but it is also the first official acoustic Metallica release, ultimately making it a special and unique addition to their discography.

Opening with a transformed “Disposable Heroes”, the band is in fine form with a big sound, a crisp series of lead lines, and warm, throaty vocals from James Hetfield. Backing musicians including a keyboard player, a percussionist, a lap steel guitarist, and an additional guitarist give the record a lush, layered tone. ”The Unforgiven”, one of the album’s highlights, is a dense acoustic rendition of a classic, exemplifying the band’s adaptability.

Furthermore, Metallica fans will enjoy hearing a large selection of songs that rarely appear in the band’s performances anymore, such as the aforementioned “Disposable Heroes”, “Bleeding Me”, “All Within My Hands”, and “The Four Horsemen”, all of which are brilliantly adapted for the intimate acoustic setting, proving that in another life, Hetfield could have been a country sensation. “All Within My Hands”, originally released on the dreaded St. Anger, deserves a special shout-out for making a triumphant return as a haunting ballad. A wide range of covers including Blue Öyster Cult’s “Veteran of the Psychic Wars”, Bob Seger’s “Turn the Page”, Nazareth’s “Please Don’t Judas Me”, and Deep Purple’s “When a Blind Man Cries” (all of which the band has covered at some point in the past), add an extra dimension to the album.

From their hits, Metallica seamlessly translates “Nothing Else Matters” for the new context, and offers an exceptional rendition of their most popular song, “Enter Sandman”; the hard-hitting arena rocker is now eerie and haunting, with Hetfield’s spine-chilling vocals echoing over rich guitars. The album concludes with “Hardwired”, a newer hit from the band’s 2016 album, which has surprisingly not been adapted. Using an acoustic thrash style for the first time on Helping Hands… Live & Acoustic at the Masonic, the band performs the closer at its original blistering tempo, with an impressive solo from Kirk Hammett.

Despite being largely composed of covers and deep cuts, Helping Hands… Live & Acoustic at the Masonic is a stellar display of musicianship. By putting the songs through such drastic transpositions, this album demonstrates that underneath its thrash metal roots, Metallica is simply a group of incredible songwriters. While the bombast and explosive energy of most Metallica concerts may not be equally present here, it is replaced with a sense of vulnerability and intimacy which only adds to the brilliance. For lifelong fans, and even those who raise their noses at loud and heavy bands in favour of acoustic indie rock, Helping Hands… Live & Acoustic at the Masonic is a flawless album from one of the world’s loudest acts who simply to refuses to stop pushing the envelope.

A passion for music has always been a part of Gerrod’s life. As a young boy, he was raised on a steady diet of the music from The Chili Peppers, Aerosmith, The Stones, Prince, and others from his mum. Raised in the GTA, Gerrod continued to foster his love for music by attending a wide range of concerts and learning the drums. His unapologetic passion for music has no bounds and has spread to a wide variety of styles, whether it be the 90’s rock that sound tracked his teenage years, the jazz he studied in university, or his newfound love for hip-hop. He recently received his bachelors in music and education from York University and is passionate about writing and reviewing good (and less than good) music. Gerrod is also the drummer and songwriter for a Toronto based rock & roll band, One In The Chamber.
RELATED ARTICLES
album reviewalbum reviewsblackened recordings
7.0