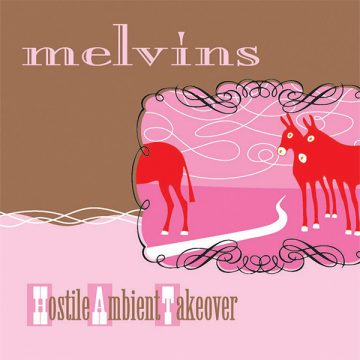 One of my favourite things is when music completely surprises me, as it did with the recent vinyl reissue of Hostile Ambient Takeover, Melvins 14th studio album from 2002 and “Dr. Geek” hits.

Hostile Ambient Takeover opens with a basic 30-sec drumbeat. Without warning, follow-up track “Black Stooges” absolutely pummels you into sweaty submission. The song is massive and it is my opinion that Melvins were at a certain peak here. Osborne’s snarling vocals and precise, almost surgical guitar technique is nothing short of mind-numbing, while Dale Crover proves why he is one of the most proficient and hard-hitting drummers in the danged game.

Further in “The Fool, The Meddling Idiot” reminds the listener that dirty sludge is alive and well in Melvins town, however it’s certainly an eclectic town as this song goes through a few unexpected movements, most notably at around the 6-min mark when the bottom starts falling out and the drums stop drumming. I’ll let you remember or discover for yourself, but it’s a gloriously weird breakdown.

By this point in their lifespan Melvins were just releasing album after album of sonic punishment, and even at nearly 20-yrs-old, this stuff sometimes still feels ahead of its time. Tight and concise kicks to your silly little mug and the society you feed off of, Buzz and pals will forever be happy to remind you of your missteps.

It took the recommendation of a best friend to get me into the pages of music magazine writing. Armed with the deepest appreciation for all the music, a ridiculous sense of humour, and the apparent ability to string a few words together, these fingers started giving. Who knew it would become one of my favourite things many years later and that I'd enjoy seeing my works published the world over?!
RELATED ARTICLES
album reviewalbum reviewsipecac recordings
10