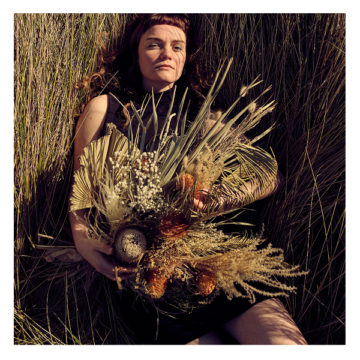 Me Lost Me
The Lay Of The Land
Independent

What is the most sensual way to convey nature’s decay and the anguish of a dying planet? In her latest EP The Lay of the Land Jayne Dent curates a peculiar exhibition of sonic interplay, in order to tell the ancient story of climate change. Jayne Dent, based in the North East of England, records under the name Me Lost Me (I Lost Myself) since 2017 and she best describes her music style as avant-folk-noise-pop.

Similar to her previous work, the album intricately takes on the technological manipulation of voice and sound, creating an aerial ambience. Each atmospheric sound, each bass drum, and each electronic beat, vehemently echoes within us Jayne’s profound sorrow. Emphasized by her otherworldly voice, the song “Sweet Dreams” is down-tempo techno enunciating a wailing rage. Her immaculate loop work is evident in “Seer-Say”, which thoughtfully fuses lines from an interview with Romy and ardently reiterates: “I would miss…seeing”.

In the heart of Me Lost Me’s work is the threading through of a folky storytelling and The Lay of the Land is no exception to this. In “The Witchery Fate Song”, which is an old Celtic song by Jean-Luc Lenoir, as well as, “The Water”, Jayne Dent’s angelic voice speaks truly to the listeners.

The Lay of the Land is a beautiful lyrical mourn that reaches a cosmic realm within a traditional storytelling.

Eleonora (a.k.a. Ellie) is a freelance music writer. Her work is dedicated to exploring the intersections between sound and culture. At the moment she is embracing the digital nomad lifestyle, while travelling the world and documenting the music and cultures she encounters.
RELATED ARTICLES
album reviewalbum reviews
8.0