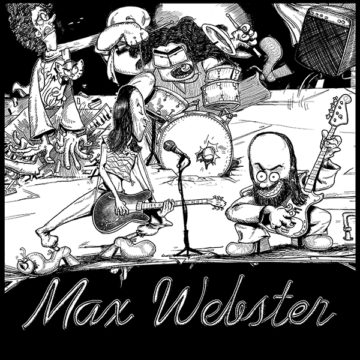 This is the album to put under the Christmas tree for any Max Webster fans still out there, as the newly remastered vinyl contains all the Max Webster hits, like “Let Go The Line” and “Paradise Skies” The box set also includes a 32-page foreword by John Derringer of Q107, a poster, and a Universal Juvenile Fan Club ID card. One listen to this and you’re back at the Gasworks on Yonge Street in Toronto in 1975. The band dissolved in 1981 after a show opening for Rush in Memphis, TN. Kim Mitchell then went on to great solo success, including hits such as “Go For Soda” and  “Patio Lanterns.”

Gerry Young is President of Current Records and Management, and author of the 2011 biography Pop Goes The Weasel: Rock And Roll Off The Record, available at Indigo/Chapters, Barnes & Noble, and Amazon.com. He has recorded and managed Juno Award winning bands Martha And The Muffins and The Parachute Club among others.
RELATED ARTICLES
album reviewsanthem legacykim mitchell
8.0