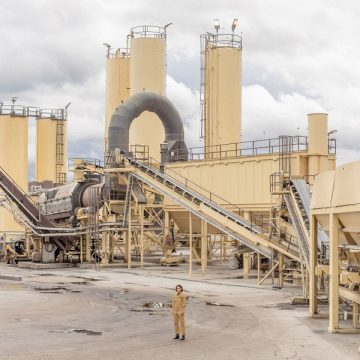 Atlanta’s Mattiel is a group based around Mattiel Brown, and Satis Factory is its second album. Working closely with Jonah Swilley (who co-produced the album with Randy Michael), Mattiel Brown has come up with a very original album full of stories, lessons, straight ahead rock ‘n’ roll, and some genuine humour.

The music has a distinct retro sound, something out of the early 1980s, but not to the point of being distracting. It has more of the spirit than the exact sound. Each song stands clearly on its own while still forming a cohesive album. Kicking off with tasteful  “Till The Moment Of Death”, melodic and energetic power pop that does a nice job of introducing the album. The last one, “Long Division”, beautifully closes the album.  Both tracks are perfect bookends for the entire album.

Mattiel’s voice is quite unique and she has already developed her own style. There is no point comparing her to anyone, because she has developed her own sound. Combined with expert musicianship, the end result is an absolute pleasure to let us spend some time in her world.

The songs are inviting and warm, while being somewhat stripped down. This is not folk, it is rockabilly at times but then again, it is all over the genre map. Traditional country fans will enjoy this album, as much as the alt-rock crowd. It is a well-produced album that is full of fun, surprises, and strong melodies. The lyrics are pretty darn good too!

Satis Factory is a brilliant album. It is an album that cries out to be played on repeat and one that you will be glad you did.

Born and raised in Whitby, Aaron discovered music through his love of The Beatles. This led to a career in radio, writing for various publications, and ultimately a radio show about The Beatles (Beatles Universe), which ran for over four years. When not immersed in music, Aaron enjoys spending time with the loves of his life -- his wife Andrea, and daughters Emily and Linda (all of whom have an intense love of music too).
RELATED ARTICLES
album reviewalbum reviewsato records
8.0