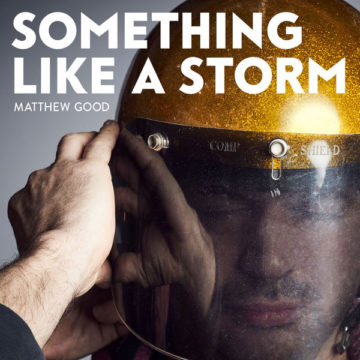 If early millennium melodies and modern beats had a baby, that baby would be Matthew Good’s Something Like A Storm.

For over 20 years, this Canadian music legend has been wowing audiences with elegant harmonies and rough but sophisticated vocals. And with 11 studio albums and 21 Juno award nominations behind him, Matthew Good is still blazing ahead and creating wondrous works of musical art.

Fans of “Apparitions” and “Strange Days” will appreciate the nostalgic feel of tracks like “Men at the Door” with its surrealist tones and robust harmonies.

Adversely, many music fans in general will love the creative growth that Good showcases in the track “Bad Guys Win.” The heavy beats, reverberated guitar solos, and electronic effects demonstrate that Good still has many tricks up his sleeve and isn’t afraid to challenge himself.

Finishing off the nine-track album is the heart-wrenching song “Bullets In a Briefcase.” Emotional and poignant, Good’s vocals tear at the soul. The transition from the piano accompaniment in the first part of the track, to the dramatic guitar in the second part of the song stirs the imagination. With every note played and sung its obvious that Good is keenly aware of how to create a haunting atmosphere within a song, a feeling that will unsettle audiences but leave them begging for more.

Music has always been a big part of Samantha’s life. Whether it was singing with a choir, reading music and playing instruments, or staying up well into the wee morning hours just to listen to the international music program on the radio, for Samantha music was as essential as breathing. One day, Samantha noticed that writing, her other obsession, always seemed to flow alongside music, and the two elements of Samantha’s life co-mingled for years. While at university, Samantha discovered that her passions could be put to use, and she embarked on the path of a music journalist. To date she has written many music reviews, news posts, and interviews and so far her work has appeared in The Voice Magazine, The Scene Magazine, and The Spill Magazine, as well as on her own website.
RELATED ARTICLES
album reviewsmatthew goodwarner music
10