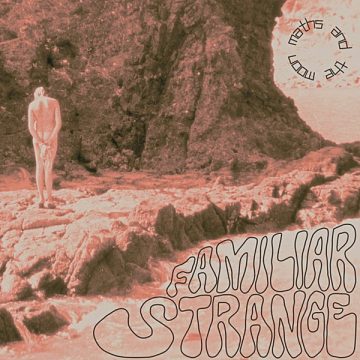 Whoever said ‘90s rock is dead was mistaken. That garage grunge so feverishly attached to the memory of Kurt Cobain has somehow been revived by this British outfit, Maths and the Moon. Their first record, Night Train Daydream, has been left behind as simply such – a daydream. In its wake, a more focused band sets its eyes on Familiar Strange, a burrow through the kind of old rock tunes you remember buzzing on the radio two decades ago. Production value and all, the team on this album was certainly committed to nostalgia in high regard. The record doesn’t just smell like, but reeks of, teen spirit.

From the moment lead single “Futurist” floods us with an angsty bass line and muffled drumming, we are taken back in time and surrounded by the band’s old-school atmosphere. It speaks volumes to the talent behind an album when it is so capable of emerging its listeners into its world. Familiar Strange lies free of most distractions. Minus the 10-minute long “In the Ellipse,” the record is saturated with tunes entirely built upon their unique atmosphere. A strong amalgamation of punk vocals and echoed guitar plucks paint a vibrant picture, giving the album visual splendor, highlighted on the slow burn of “The Collector.” This funnels nicely into “Boomerang,” whose title could not be more fitting as it draws us back into the darker depths we were pulled into with the album’s first few tracks. This lends nicely to the second half of the record standing stronger than the first, with “As the Crow Flies” aiming high and succeeding with its driving, dreamy guitar lines acting as a fitting climax for Familiar Strange. All of these tracks contribute to a successful blend of vocal and instrumental work – the two never outshining their counterpart but working harmoniously throughout.

The true testament to Familiar Strange is not just its nostalgic rock methods but also the fact that in its 50-plus-minute running time, it never feels taught, old or dragging. The main issue with the record is the 10-minute interlude, but a simple fast forward button cures us of its endlessness. Despite being only nine tracks in length, Familiar Strange feels full and not overly so. Maths and the Moon have done a great service to modern rock music with this record, which deserves a far greater audience than it will likely receive.