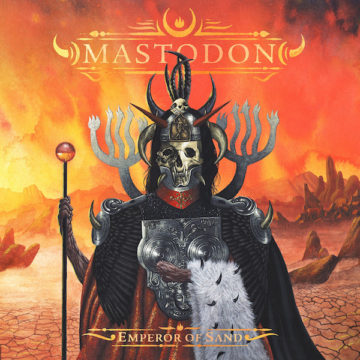 Mastodon’s latest album Emperor of Sand is yet another example of the group’s mastery of contemporary metal music.

Sultan’s Curse” is an immediately compelling intro track that includes signature Mastodon elements like barbaric vocals and grungy metal guitar riffs, and songs such as “Steambreather” and “Ancient Kingdom” provide insight into what might be considered a paragon of modern metal music. The frantic shred-style guitar solos on tracks like “Word To The Wise” will also serve to both attract new fans and keep long-time Mastodon fanatics pleased.

The album is also incredibly versatile. Songs like “Roots Remain” and the closing track “Jaguar God” are demonstrative of the group’s ability to weave together heavy and soft, melodic and guttural compositional elements in order to create modern epic narratives–which is fitting, given the band’s continuing artistic and lyrical obsessions with mythology and ancient lore.

Lyrically, Emperor of Sand deals with passing into an afterlife, and alludes to many ancient Eastern and Middle Eastern myths–a prevalent theme accentuated by poetic compositional style  that seems to meld sphinx riddles with Lewis Carroll rhymes (“Ancient Kingdom”). The imagery and sense of immanent death in “Sultan’s Curse” set the tone for the rest of the album, and these themes culminate throughout tracks like “Andromeda” and “Clandestiny”.

Unfortunately, like Superman and the Death Star, Emperor of Sand does have one significant weakness. While “Show Yourself” is not itself a terrible song, it is definitely out of place on the album. The track is overly poppy (as the album’s second single) and is potentially alienating to anyone not engaging with the full album.

Overall, Emperor of Sand is certain to become a staple not only in the Mastodon collection, but also in the general twenty-first century metal canon.

The Spill Magazine is a Toronto-based online publication dedicated to covering the independent music scene with a strong focus on our thriving hometown talent. Our writers bring you up-to-date news, in-depth features on musicians and reviews for the latest CD releases. We also travel to the front lines for all local festivals including Canadian Music Week and North by Northeast. Don’t forget to check out our Facebook and Twitter pages for all daily Spill updates.
RELATED ARTICLES
album reviewsmastodonreprise
8.0