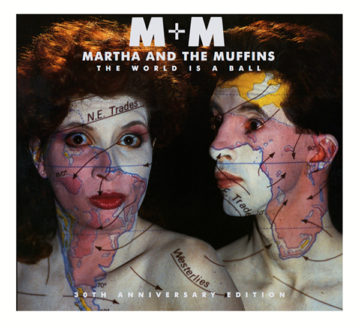 Originally released in 1986, The World Is A Ball would prove to be the last Martha and the Muffins album for six years, until their return in 1992 with Modern Lullaby. It would also be their last album for the Current/RCA label. Changes were afoot, and one can hear that Mark Gane and Martha Johnson (the core of Martha and the Muffins) were transitioning their sound, especially Martha’s voice, which is stronger and more confident on this album.

A lot of these differences can be attributed to co-producer David Lord. Their previous three albums were co-produced with Daniel Lanois, and this created a much more atmospheric sound. The World Is A Ball is a much harder and louder sound. But again, the vocals shine through and Martha has said that Lord challenged her to do these incredible vocals. Listen to the title track and the tone is set.

This is the most commercial album of their career, but commercial does not mean it isn’t a great album. It is a great album, and it is Martha and The Muffins version of commercial. Maybe I should paraphrase; it is musically more commercial but lyrically, it is not a light album. “Stuck On The Grid”, “Don’t Jump The Gun”, and “By The Rivers of Babylon”, include lyrics about urban violence, loneliness, and fear; not exactly top fort material. These are lyrics that apply as much today as they did all those years ago. Mind you, this album does feature hit singles, “Song In My Head” and “Only You” (the video for this song, made by Mark Gane and Martha Johnson, won Best Music Video at the 1987 Yorkton Short Film and Video Festival, and was nominated for a Juno for best music video) proved to be radio friendly and welcome additions to the album.

As for the reissue, Mark and Martha have assembled a beautiful package. A detailed booklet featuring a wealth of information. The CD sounds wonderful and the bonus tracks are a welcome addition to the collection. The bonus tracks are a non album B-side (“Riverine”) and 12 inch remixes of “Song In My Head.”  This also completes the Martha And The Muffins reissues of their first six albums.

After many years, this album returns and makes its debut on CD/Digital. It is album that has been missed, and its return is more than welcomed. It is a brilliant album that deserves to be rediscovered. Take the time, listen to this album, and enjoy.

Here's what we think...
Spill Rating
Fan Rating
Rate Here
New Criteria
10
9.4
8.0
Total Spill Rating
9.4
Total Fan Rating
You have rated this
Album Reviews
album reviewsi watch i waitmartha and the muffinsonly youriverinestuck on the gridthe world is a ball
album reviews, i watch i wait, martha and the muffins, only you, riverine, stuck on the grid, the world is a ball
About the Author
Aaron Badgley

Born and raised in Whitby, Aaron discovered music through his love of The Beatles. This led to a career in radio, writing for various publications, and ultimately a radio show about The Beatles (Beatles Universe), which ran for over four years. When not immersed in music, Aaron enjoys spending time with the loves of his life -- his wife Andrea, and daughters Emily and Linda (all of whom have an intense love of music too).
RELATED ARTICLES
album reviewsmartha and the muffinsthe world is a ball
9.0