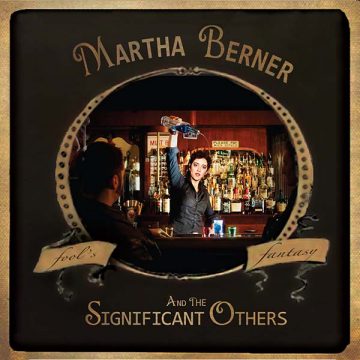 Martha Berner’s new LP Fool’s Fantasy is airtight. But airtight like seafood at the Chinese supermarket I frequent. It might taste good once you cook it up, but it doesn’t smack you in the face and shout ‘Hey man! I’m delicious!’ Fool’s Fantasy has terrific studio musicians and a singer who sounds like she’s feeling it. But for all the instruments and the playful chugging of the guitar on “Brave,” the beginning Acapella bit of “Cry,” this album isn’t able to reach that point where you get excited about connecting with something. However, the record improves as you move along. The first four tracks are a little stale. Maybe the songs just aren’t as well written as the second half of the record, but they share an issue with the rest of the album that I think may be interesting to talk about.

Fool’s Fantasy is reasonably well written. But I have a hunch Berner ran into the dangerous situation of being a musician with a budget. Nowadays, technology being what it is, musicians can start recording their music right from the get-go. This leads to plenty of shitty recordings that should never have been released. But it also leads to some great raw tracks, often going unappreciated because of sound quality and radio play standards. It’s a shame. But a lot of great records have been made by bands or artists scraping five hundred dish-washing-dollars together for a couple hours in the studio.

So why is this record not living up to my hopes? Because, I believe, Berner got excited at the prospects of a big budget and made the mistake of letting production take the driver’s seat. The songs tend to play second fiddle to sound quality and production.
“Wolves” is a good song; I was really excited about it until the imminent death knell of a pop-drum-fill-pumping-up-any-tune-whether-it-needs-it-or-not slid in there like a 17yearold kid in the backdoor of a bar on Saturday. But the band held back a lot more than on the previous songs. Which may be why Wolves stands out to me so much. The band could have killed it. But they didn’t.

I say the first four songs are nothing special. There’s some misses later on in the record as well (though I may just be saying that because she took my dream band name Martha Berner and the Significant Others minus the Martha in my case), but overall it gets better, winding down at the end for something pretty nice – namely the track “People are Crazy.” If there’s any song that heavy production didn’t take away from, it might be this one.