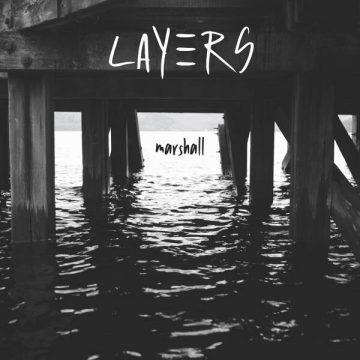 Ever since Ryan Marshall and his band Walk Off the Earth’s video cover of Gotye & Kimbra’s “Somebody That I Used To Know” garnered over 180 million views on YouTube, they haven’t looked back. The indie band has captivated fans with their unique blend of folk, rock, pop, and reggae with both originals and cover songs. Tracks like the indie rock-infused “Red Hands” and the uplifting, empowered “Rule the World” are some of their most recognizable hits. Now, Marshall has gone solo and presents a different side of himself with his debut album, Layers.

Marshall introduces his sound by combine elements of electronic and vocoder-like effects in his vocals on the opening track, “Shadows.” Songs like “Don’t Fall When You Run” and “Four Years” combine piano and drumbeats to create an exceptional effect. The inspiring first single from the album, “I Could Be the One”, is packed with energizing electronic beats and lyrics as Marshall sings about overcoming fears and doubts, and accepting yourself.

Overall, Layers is a solid debut. Marshall demonstrates his ability to stay true to himself and make the album his own. His lyrics about love, breakup, and acceptance follow a consistent theme with unfailing production and vocals. An impressive showing on his first creative project, the sky’s the limit on Marshall’s next move in music.

Andrew is an aspiring photographer hailing from Toronto, who is currently in his final year at OCAD University. Ever since he took pictures with his old iPhone at an Imagine Dragons concert in 2018, it began his goals and dreams to pursue a career to photograph live music, and to work in the music industry. He loves concert photography because it combines his passion for photographing memories and listening to music. His favourite genres of music are pop, electronic, and alternative rock.
RELATED ARTICLES
album reviewalbum reviewswalk off the earth
9.0