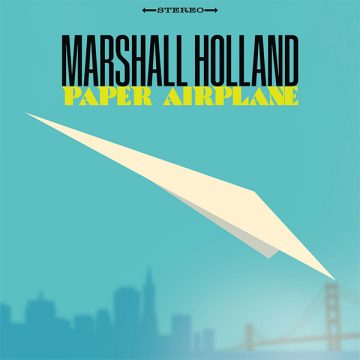 This fall saw the release of an excellent collection of songs by the San Francisco Bay Area artist, Marshall Holland. Paper Airplane is Holland’s first album of singer-songwriter baroque power pop since his 2014 release Marshall Holland and the Etceteras.

After releasing an album of electronica (Nice To Meet You) in March, 2020, Holland was compelled by events both global and personal, to create the song cycle which became Paper Airplane. A music and media jack of all trades, Holland plays all instruments on this album, and the result is a brilliant recording.

Stylistically, Paper Airplane is sort of all over the place. Channels are changed between 1960s vintage pop sounds, post-punk British New Wave inflections, and sincere singer-songwriter stylings. But that is not a liability for this album. On the contrary, it only serves to enrich the listening experience. Holland shifts effortlessly between genres, and his performance and producing chops are strong. He has the ability to wear a variety of hats simultaneously and to great success – all in service to the songs on this album.

There are many memorable moments here, but standout tracks on Paper Airplane include the Costello-inspired “She Buys a Dress (To Match With Her Pink Belt)”, where Holland showcases his abilities as a one-man attractions band. On the other end of the sonic spectrum, the dreamily sweet “A Hand Holds A Bird” evokes ‘60s pop, as well as giving a modern nod to the sound of acts such as Peter Bjorn and John.

Out of adversity comes art. Out of art comes hope. On Paper Airplane, Marshall Holland has employed adversity to create something beautiful and memorable.

Bryan Williston has been involved in music since he was a young child. A veteran singer, songwriter, and music educator, Bryan has enjoyed playing a multitude of musical genres in a variety of outfits, over the years. Bryan lives in Whitby, Ontario.
RELATED ARTICLES
album reviewalbum reviewsmarshall holland
7.0