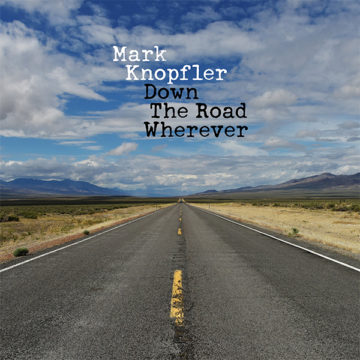 Mark Knopfler
Down The Road Wherever (Deluxe)
British Grove/Universal Music

With his ninth studio album Down The Road Wherever, Mark Knopfler, former leader and founder of the ‘80s U.K. band Dire Straits, delivers 14 unhurried and (typically for him) elegant songs, although it should be noted that the “Deluxe” release includes two extra bonus tracks.

All the songs are self-penned by Knopfler, except for “Just A Boy Away From Home” where he shares writing credits with Rogers and Hammerstein, as he uses a piece of “You’ll Never Walk Alone” to spin his tale of a lonely Liverpudlian boy, walking the streets of Newcastle after a football (soccer) defeat.

Once again, Knopfler has surrounded himself with a coterie of fine musicians to flush out each song in the studio, and key cuts include “Back On The Dance Floor” and “Good On You Son”, with their signature tasty Knopfler guitar solos, the horn-infused “Nobody Does That”, the reflective “One Song At A Time” documenting his personal musical journey in life, and the jazzy and breezy “Floating Away”, with its cool piano opening and stellar vocals from his backup singers. Also worth mentioning is the smoky ballad  “When You Leave”, featuring Tom Walsh on trumpet.

Although not every track on the album is a winner (hard to do when including 14-16 tracks), and some may not exactly be your particular cup of tea, it must be said that Knopfler never fails to surprise his listeners, and for those who take the time, they’ll discover that once again, he has delivered another solid album. Almost 40 years after the release of Dire Straits breakthrough single “Sultans of Swing” Knopfler is still making magic in the studio.

Gerry Young is President of Current Records and Management, and author of the 2011 biography Pop Goes The Weasel: Rock And Roll Off The Record, available at Indigo/Chapters, Barnes & Noble, and Amazon.com. He has recorded and managed Juno Award winning bands Martha And The Muffins and The Parachute Club among others.
RELATED ARTICLES
album reviewalbum reviewsuniversal music
8.0