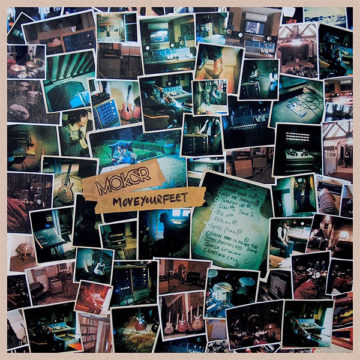 Move Your Feet is a five track EP from UK’s Maker.  This four piece band know their rock history and their music.  The result is a rocking, bluesy, powerful EP.

Co-produced by the band and Nick Brine, who up to now has been known as an engineer rather than a producer, brings his experience to the fold and this helps the band plush out their sound.  Brine and the band have a clear sound in their head and for the most part they achieve this sound.  While they borrow heavily from the U.K. blues scene of old (and new), their sound can also be compared to the likes of The Black Crowes and Little Feat.

The sound I am thinking they were going for was ‘60’s rock and soul.  But this does not sound retro, but rather a current take on this classic rock sound.  Alessandro Marinelli punches through the dense sound of the band with some very powerful vocals, restrained yet powerful.  His timing and use of his voice is stunning.  Credit needs to be given to the band for creating their sound with basically a three piece attacking their instruments.  Andrew Donaldson is a very talented guitarist, who plays some fine slide on “Get Me Through”, which makes me wish he did more on the EP with his slide.  Gavin Donaldson uses his drums effectively and does not try to overpower the band.  He is good, and we all know, from listening, that if he wanted he would break loose.  John Austin assists the rythm of the band with his steady and, perhaps at times, buried bass lines.  He is good and and maybe in future releases he could be more highlighted.

This is a short, debut from a very talented band.  Lyrically they are not breaking any new ground, nor do I think that is their intention.  The group focuses on their sound, which is tight and rocking.

Judging from their press release, this band has been paying their dues, the old fashion way. Club dates and opening for such bands as Slydigs (who had opened for The Who), Ocean Colour Scene and Peter Doherty.  They have also played some festivals in the Europe and The U.K.

Given this is a short introduction to the band, I look forward to what they can do when given the expanded format of a full length album.  A great debut and a great EP.