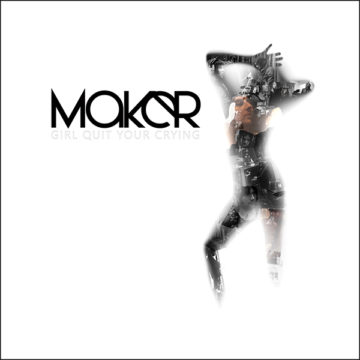 These guys just keep getting better and better. Girl Quit Your Crying is Maker’s second five track EP (their first, Move Your Feet was released earlier this year) and it not only picks up where Move Your Feet left off, it is even better. This EP is straight ahead rock, which grabs you with the first note, and does not let up until the dying sound of the fifth track. Pure excitement!

On this release, the band sounds a bit more confident and a bit more willing to take some chances, and it all pays off. Listen to lead vocalist Alessandro Marinelli on the song “Are You Watching Me?” His voice is powerful and full of emotion. Actually everything about that song is near perfect.  A true highlight of the EP, the band is tight, aggressive, and sounding like a unit who have been playing together for twenty years.

Throughout the EP, as with their debut release,  all members play extremely well, but on Girl Quit Your Crying, drummer Gavin Donaldson needs a bit of recognition for his restrained Keith Moon playing. He can let loose, but often he doesn’t.  And he makes excellent use of his cymbals throughout. Andrew Donaldson provides tasty solos and excellent guitar work throughout, which along with bassist John Austin, pushing this band into their stratosphere.

Also worth note is the ballad, “Girl Quit Your Crying”, not the usual romantic ballad one expects from a hard driving band, but rather an energetic, forceful song, featuring some pretty awesome keyboard playing, actually the piano on “Lose It On The Second Turn” is perfect for the song. It is nice to hear the band branch out into something a little different for them.  t should prove to them that they can handle many styles of music.

The EP was produced by the band and Nick Brine (who has worked in the production and engineering field with The Darkness, Stone Roses and Oasis, to name just three).  They know how to capture this band’s distinct sound and make them sound retro while at the same time sounding remarkably current. A brilliant achievement.

This band is destined for great things. This is only their second EP and I am anxiously awaiting a debut album. Maker is kind of like your friend who comes a bit late to the party, but once they are there the party comes alive.  They know their vocals and instruments and use everything to it’s  full potential. Girl Quit Your Crying is a brilliant EP!  A perfect soundtrack for the remainder of the summer.