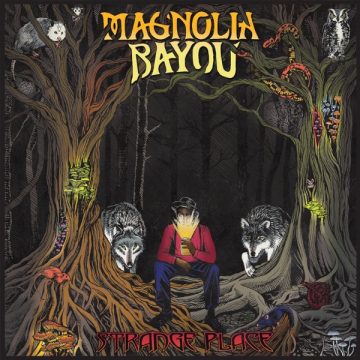 Hailing from Southern Mississippi, Magnolia Bayou have released their sophomore album, Strange Place. The full-length album follows their 2018 self-titled debut and a series of singles released throughout this year, four of which can be found on Strange Place, and the fifth being a cover of the Alice In Chains classic, “Nutshell”. Strange Place delivers a strong throwback to the Southern rock of the ‘70s in a manner reminiscent of The Black Crowes.

Opening with the crunching riff of “Dig Deep”, Magnolia Bayou set the tone with a big rocker set in the style of the past. A strong opener by any standard, the track almost feels underwhelming by the time the second track, “Sleepin’ In The Dog House” kicks off. The bluesy number grooves as hard as it hits and demonstrates a far more unique sound for the band that, among the growing new wave of classic rock movement, certainly sets Magnolia Bayou apart from their contemporaries.

It is clear that Magnolia Bayou are at their best when they dig deep into the blues. Tracks like “The Robber”, “From The Other Side”, and the soulful ballad “Hurricane”, feel like they were pulled straight from the deepest and darkest pit the Delta has to offer. “Thieves” is a bouncing hard rocker nostalgic for classic Aerosmith. While there are a number of moments that shine bright, “Preachin’ Blues” is among the strongest songs Strange Place offers, and is a definite high point for the band. With its slide guitar riffing, sparse organs and keys, and tight groove, “Preachin’ Blues” sounds as if it was pulled straight from the greatest hits of The Black Crowes.

Magnolia Bayou take their audience deep down to the heart of the Mississippi Delta on Strange Place, an album that gives a modern and fresh take on the blues and ‘70s rock. While it may feel long, the eleven tracks are all solid at their worst, and refreshingly exciting at their best. Aside from a few moments of filler rock, Magnolia Bayou has crafted a unique sonic identity among the underground rock scene that is based around great songwriting and a stronger performance full of soul and conviction.