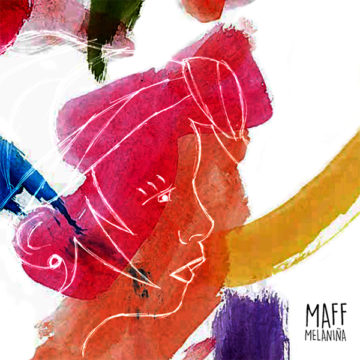 Maff is a quartet, originally from and still based in Chile.  Melaniña is their second release, following their debut album Maff (2014). The band consists of Ricardo Gomez (vocals, guitars) and Nicolas Colombres (drums), who formed the band in 2012. Valentina Cardenas (bass) and Martin Colombres (guitar) are recent additions. Gomez writes the songs.

If prog rock and 1980’s goth/pop had a child, it may sound a lot like Maff. Their music does not fit in one genre. Melaniña begins with the brilliant instrumental “Act II” and ends with “Appear”, a song that The Jesus and Mary Chain would have traded their last tube of hair gel  to have written. The rest of the EP runs the gamut of styles and sounds.

Lyrically, it is not a light record. Gomez has said that the songs were written after the birth of his daughter, who is featured on the sleeve of the record, but that does not mean it is all happiness, in fact quite the opposite. Listen to “Desfile”, which is sung in Spanish (most of their songs are in English). Some of the lyrics, translated, include “I hold on one more day… I am in a waste parade.” Not exactly a lullaby, but it is honest.

Maff refer to themselves as a ‘shoegazer’ band, but there is so much more to them. They are a talented, unique band. There is plenty here for people to dig into and discover this band. My only complaint is that it is only an EP, by the end of the record, one cannot help but wish it would go on and on. Maff create their own magnificent and wonderful sound/music.

Born and raised in Whitby, Aaron discovered music through his love of The Beatles. This led to a career in radio, writing for various publications, and ultimately a radio show about The Beatles (Beatles Universe), which ran for over four years. When not immersed in music, Aaron enjoys spending time with the loves of his life -- his wife Andrea, and daughters Emily and Linda (all of whom have an intense love of music too).
RELATED ARTICLES
album reviewsmaffmelaniña
7.0