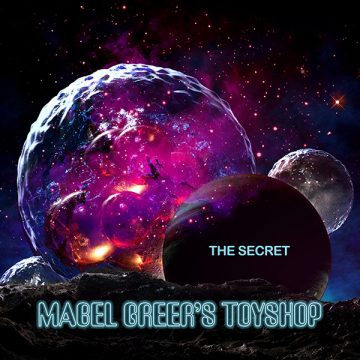 Before there was Yes, there was Mabel Greer’s Toyshop, a band that formed in London in 1966. The band was formed by Clive Bailey (guitar), Robert (Bob) Hagger (drums) and Paul Rutledge (bass). Chris Squire and Peter Banks made their way into the band, and eventually Jon Anderson joined to complete an early line-up. Although they recorded many demos and songs, and played a lot of gigs in and around London, the band evolved into Yes; Mabel Greer’s Toyshop faded into rock history without releasing a single record.

The band reformed in 2014, featuring Bailey, Hagger, Tony Kaye (on keyboards), Hugo Barre (bass), and Billy Sherwood (bass). The band recorded what would be their debut album called New Way Of Life (2015). Now in 2017, Bailey, Hagger and Barre are joined by Max Hunt (keyboards) and the late Peter Banks on one track, “The Secret” (the title track, which is achingly beautiful), thanks to technology. The music world lost Banks in 2013 and he was not able to return to Mabel Greer’s Toyshop, but through the miracle of music and technology he plays guitar on this one song.

This is an incredible album. The Secret is not a throwback to a prog rock era of long ago, or a trip down memory lane. The Secret is a contemporary album, with some prog rock leanings, with new and incredible sounds. This is strong playing and a tight band that has both written and performed. Their debut album was a strong release featuring some re-recorded older songs. This album features all new songs, and it is clear that Bailey and company have built on their artistry and Mabel Greer’s Toyshop has a distinct sound. They do not sound like Yes or anyone else, they sound like Mabel Greer’s Toyshop.

Some of the songs are long, harkening back to their prog rock days, but this band is more than prog rock, they are a true band in a collaborative sense. Listen to “More and More”; it starts with atmospheric keyboards and lapses into an almost bluesy song. It sounds incredible. “You” (not the George Harrison song of the same name) is a beautiful piano based love song. There are different sounds throughout the album, yet it forms a cohesive work.

Lyrically the songs deal with love (“Turning To The Light”, one of the many highlights) to isolation (“Angel Sent”) to loss (“Big Brother, Little Brother” which brilliantly opens the album). There is a great deal to explore, including a poem by Dr. David Nurbakhsh (“Image of Existence”). Bailey has written a moving piece of music to accompany the rather heavy poem, but it works. This is not typical rock fare these days, but I am glad a band such as Mabel Greer’s Toyshop is willing to expand the idea of a rock album.

This is a welcome return to form for this band. It is encouraging to hear an album from Mabel Greer’s Toyshop comprised of all new material. This band has a history, one that is well known, but forget all that, and focus on this music, as it is a work of art. The Secret is well done, and I am hoping for more to come. It is also nice to hear Banks again, as he is greatly missed. All in all, The Secret is a remarkable album, with an awesome album sleeve. Highly recommended.

Born and raised in Whitby, Aaron discovered music through his love of The Beatles. This led to a career in radio, writing for various publications, and ultimately a radio show about The Beatles (Beatles Universe), which ran for over four years. When not immersed in music, Aaron enjoys spending time with the loves of his life -- his wife Andrea, and daughters Emily and Linda (all of whom have an intense love of music too).
RELATED ARTICLES
album reviewsmabel greer's toyshopoceans
7.0