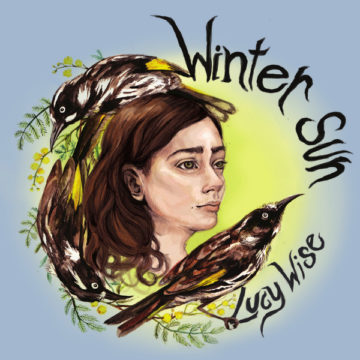 If Joni Mitchell and Sandy Denny had a child together, she might sound a lot like Lucy Wise. Wise is an Australian singer/songwriter in the folk tradition and Winter Sun is her solo debut album. She has issued albums as Lucy Wise Trio and Lucy Wise and The B’ Gollies. It has been three years since her last release, and she has used this time to write and craft 12 beautiful songs.  There are also two covers on the album.

Producer Nick Higgins, very wisely, utilizes very sparse production for this album. It would have been easy to have it awash with orchestras and string quartets, but instead it is the purity of Wise’s playing and her beautiful voice. She does have help on this one, notably John Flanagan (who provides vocals, guitar, piano  and banjo on some of the songs), Isaac Gunnoo (double bass) and Mischa Herman (accordion and piano). Wise’s playing on the ukulele and appalachian dulcimer is inspiring at times, and demonstrates just how effective these instruments can be in terms of adding to the overall mood and tone of the song.

Lyrically the album confronts loss, betrayal and explores self healing. The songs are not dark, although there are melancholic overtones to the album. The album is about survival. The title track, as an example, “Winter Sun”, features the line “just keep walking, leave those foreign thoughts behind”. Clearly she is moving on but not without some effort. That is the theme of the album, survival.

Wise also knows how to pick the songs she covers. One of the highlights of the album is her cover of “Hard Times” by Gillian Welch and Dave Rawlings, from Welch’s album The Harrow and The Harvest. Wise not only makes it her own, she lives and breathes every word. It is simply breathtaking to hear her with this song.

Wise is extremely talented, and one can hear her influences, but for the most part she makes her own distinct sound. This is pure folk music, played well and with a great deal of emotion. This sounds like a personal record in which others can partake and feel included.