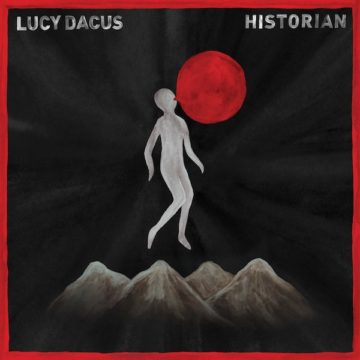 Having listened to Lucy Dacus’ 2016 debut album No Burden, you’d not be mistaken to wonder if this is in fact the same artist, with less than two years having passed. Such is the depth of her musical and lyrical maturity on show here on Historian. This is an album that, right from the first few notes, pulls the listener in and immerses them in a vastly altered sonic landscape, featuring distorted guitar, constant and varied percussion, and so many uses of creative instrumentation to punctuate key moments of rise and fall, most notably horns. On top of this incredible wealth of instrumental quality are Dacus’ lyrics, which are equal parts cautiously hopeful and disastrously heart-breaking; she reveals as much as she suggests and does so with unquestionable confidence.

The album begins in a musically grand but lyrically painful place with “Night Shift” as Dacus recounts a relationship that has left her seemingly permanently scarred; the song rises to a truly transcendent climax immersed in sadness. Second track “Addictions” hides its sadness and detachment in music that misleads with its own positivity before “The Shell” truly wallows in loss. Consider the following lyrics: “If I had the offer to do it again, make me invincible, invisible or brain-dead; if the body and the life were two things that we could divide, I’d deliver up my shell to be filled with somebody else”.  It is at this point that the intention behind the album begins to coalesce for the listener – this album, and most specifically these lyrics, are Dacus’ manual for self-preservation amidst the tumult and turmoil of life, personally and perhaps on a grander American scale, both politically and socially (“Yours and Mine” in particular seems to echo that sentiment).  Yes, there is a profound sense of loss here, but as previously mentioned, there is also cause for hope.  Dacus has said as much herself, stating that “What I’m trying to say throughout the album is that hope survives, even in the face of the worst stuff.” She may not always know how to move forward from that which has laid her low, but damn it if she doesn’t intend to try.

Though it is subtle for the majority of the album, it is perhaps Dacus’ vocals that are the most impressive instrument on show; hers is a voice that is reminiscent of a different time and a different style. Such is its smoothness and emotive quality, especially when combined with the emotional honesty of her lyrics, that the listener is made all too aware how close to home this is for Dacus. It is perhaps in the moments when she alters her vocal delivery (consider, for example, the lift and pain in her voice as “Night Shift” reaches its crescendo up against the snarl of the line “my soul screams out to you” in “Pillar of Truth”) that make clear how much range and talent she has at her vocal disposal.

This is without question an exceptionally crafted album; it is home to its fair share of sadness and pain, but possibility also lives here just as that same measureless possibility lies in front of Lucy Dacus. There is so much to this album to love but perhaps it is that sense of a door opening in front of this unquestionably talented artist that stands out the most.

Br. lives in southern Ontario, grew up on The Beatles and The Journeymen, spent his adolescence immersed in grunge, and his adulthood in British alternative. His greatest joy is seeing his son dance and grow into his own appreciation of the indescribable joy of music...
RELATED ARTICLES
album reviewshistorianlucy dacus
8.0