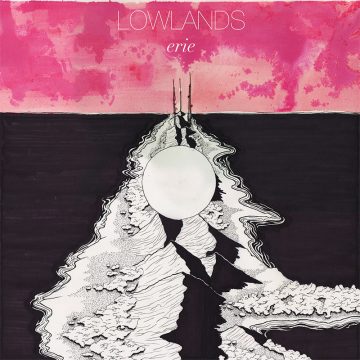 Lowlands have unearthed their third full-length studio album, Erie, the predecessor of Huron. This time, recorded on the newly founded, Chelsea Records. It has been a long anticipated wait – four years to be precise. However, it was well worth the wait. The latest album continues on the same path of the last, travelling to a new Great Lake with similar adventures and sounds, but it’s a new tune to say the least.

The first song on the album “Wind Blows Back” begins softly with vocalist Gordon Auld crooning over a solo banjo. Harmonies join in with the rest of the band and the song sees new life as it’s taken from barren acoustics and a single voice to embracing a voluptuous sound in Lowlands’ folk-stylings. Their dynamic throughout the song grows and fades so naturally and organically, dancing like the smoke and fire in the lyrics.

Each song is a story, beautifully and eloquently put together by the song writing duo, Gordon Auld and Abe Del Bel Belluz. Erie flows gently from one song to the next, from one journey to another.

“Run” is the second song on Erie and Lowlands’ music video premiere, produced by a Pocket History of Mars. It begins similar to the opening track; bare, but like many of their great songs it continues to build into a dark, rich ambience with a catchy rhythm and wistful lyrics. “Run” is the highlight of Erie; a song with a driving backbeat and a haunting chorus.

You can hear angst and sorrow in Auld’s voice as he sings the fifth song, “Broken Man,” which is in character of the singer and discerning to the listener. After “Broken Man,” the album begins to slow down and becomes blissful almost. It might not be as exciting, but there is poetry in the dynamic whether it was planned or not; you rode high, now we’ll bring you down slowly and peacefully.

Albums are tough to advocate when you can listen, but can’t see who is doing the work; the band or the producer. Although it is a known fact that Lowlands recorded Erie live – off the floor, and with limited overdubs. Which was said to be encouraged by the album’s producer, Gavin Gardiner, lead vocalist for The Wooden Sky.

If anything, Erie is the long anticipated album to reassure that Lowlands will continue writing an album for each Great Lake. Now you still have Michigan, Superior and Ontario to look forward to in the future.

Robert Janes is a journalist and conversationalist from Guelph, ON. He wears his pants with a belt and most likely listens to the same music as your parents.
RELATED ARTICLES
album reviewserierun
9.0