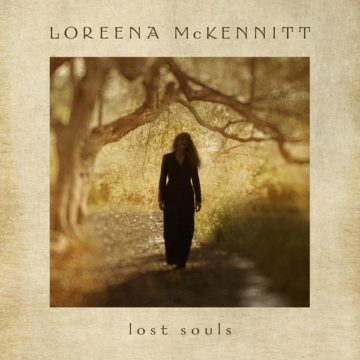 Lost Souls is Loreena McKennitt’s tenth studio album, and her first album of original material since 2006’s An Ancient Muse. She has  released albums since An Ancient Muse (2008’s A Midwinter Night’s Dream and 2010’s The Wind That Shakes the Barley) but those albums were comprised of brilliant arrangements of traditional material. Lost Souls is pure McKennitt, and as good as her last two albums were, and they were genius, it is so nice to have an album of her original  writing.

A great deal has happened in McKennitt’s life since 2006, both personally and professionally, and although this album is a collection of ‘leftovers’ from previous albums, one cannot help but hear some of what she has experienced expressed in the music, melodies and arrangements. Simply put, this albums feels personal and yet welcoming to all who wish to join her. Lost Souls is sheer beauty and brilliance.

Given that these songs were never intended to co-exist as a collection, it is even more astounding that they form such a consistent album. Here McKennitt has rediscovered songs from the past that did not fit on the contemporary albums of the time. She has brought together musicians with whom she has worked with in the past (Brian Hughes, Hugh Marsh and Caroline Lavelle to name just three) and has reworked these songs so they all fit together nicely in this package.

The instrumental performance is inspirational, and McKennitt’s voice has never sounded so good. One hears the emotion in her voice as she sings, especially in songs such as “A Hundred Wishes” and the staggeringly beautiful “Breaking Of The Sword”, a song inspired by McKennitt’s participation in the 100th anniversary of Vimy Ridge. “Is it now a mother’s blessing, That the country’s truly free?” she sings. When the Stratford Concert Choir joins McKennitt, who performs the song wih The Central Band of the Armed Forces, the emotion is almost overwhelming. It is a beautiful piece of music and some of the most stirring lyrics set to music.

Of course no Loreena McKennitt album is complete without instrumentals, and the two included in this album “Sun, Moon and Stars” and “Manx Ayre” are exquisite.

Lost Souls is about lost souls, both as songs and as people. Thankfully Ms. McKennitt has brought them all together into one strong, solid album. And she invites all to join the lost souls, as she does with her listeners and her fanbase. How can one feel alone with beauty such as this album to draw them together. It may have taken longer than I like, but McKennitt is back and the world is really a better place for it.

Born and raised in Whitby, Aaron discovered music through his love of The Beatles. This led to a career in radio, writing for various publications, and ultimately a radio show about The Beatles (Beatles Universe), which ran for over four years. When not immersed in music, Aaron enjoys spending time with the loves of his life -- his wife Andrea, and daughters Emily and Linda (all of whom have an intense love of music too).
RELATED ARTICLES
album reviewsloreena mckennittlost souls
7.0