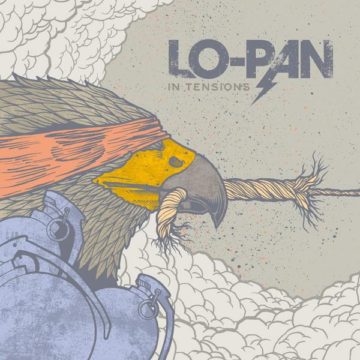 Hailing from Columbus, Ohio, Lo-Pan’s latest release is a brilliant follow-up to their 2014 full-length album Colussus. In Tensions is the band’s first release on Brooklyn’s Aqualamb Records and signifies the band’s commitment to progressing themselves as a band and as musicians.

Fans of Black Sabbath are sure to love the heavier sound that dominates In Tensions, whereas fans of Pearl Jam will adore the breathy vocals. This balance of heavy and light sounds gives the music on In Tensions a robustness and richness that is rarely heard.

While all tracks on the EP offer something noteworthy, there are two notable tracks that stand out the most: “Go West” and “Alexis”.

As the opening track of the EP “Go West” centres on the band’s philosophy: setting goals, flexibility, and moving forward. The steady drums, bass, and guitar dominate the track from the very first note, and as the song progresses they almost overpower the vocals at times. Yet the musical steadfastness of the track adds to the overall theme of “Go West”. The fact that the music and lyrics match so well speaks volumes about Lo-Pans capabilities as musicians and songwriters.

“Alexis” is different from the other tracks on the album. There is a roughness to the intro, like the gritty sound that old vinyl has to it. “Alexis” also opens with a beautiful vocal declaration that dominates the track until the music abruptly chimes in. There is also an arabesque flare to the vocals, giving this song a complexity that isn’t heard in the rest of the EP, and the long drawn out notes denote feelings of passion and longing.

In Tensions is an important stepping-stone for Lo-Pan, as they find themselves already on the road gearing up for a busy year of touring. If In Tensions is any indication of the band’s promise to keep progressing, to keep perfecting their music, then the future can only hold bright things for Lo-Pan.

Music has always been a big part of Samantha’s life. Whether it was singing with a choir, reading music and playing instruments, or staying up well into the wee morning hours just to listen to the international music program on the radio, for Samantha music was as essential as breathing. One day, Samantha noticed that writing, her other obsession, always seemed to flow alongside music, and the two elements of Samantha’s life co-mingled for years. While at university, Samantha discovered that her passions could be put to use, and she embarked on the path of a music journalist. To date she has written many music reviews, news posts, and interviews and so far her work has appeared in The Voice Magazine, The Scene Magazine, and The Spill Magazine, as well as on her own website.
RELATED ARTICLES
album reviews
9.0