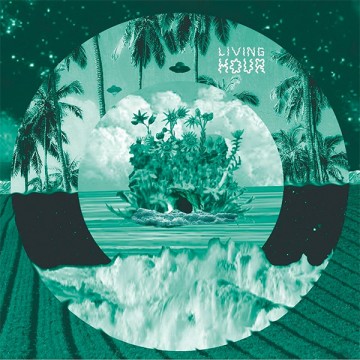 Winnipeg five-some Living Hour introduces its mix of swinging guitars, lush dreamy soundscapes and heavy bass rolls on their eight-track, self-titled debut. On Living Hour, the band wrangles with ambient noise over daring lifts, all the while keeping a consistent sound. Connections can instantly be drawn between Living Hour and My Morning Jacket or Lord Huron – each band capitalizing on the smooth, sleepy tones contained inside a combination of rock’n’roll instruments. A constant hum veils the album in the musical equivalent of a translucent screen, quieting moments that would otherwise soar through stadium shows. This contributes more and more to a signature as the record continues on. The low-volume plays complement the band as a whole, though it occasionally steals the show from any potential lyric success early on.

With almost every track standing at more than five minutes, the record can become tedious. The hum that hushes so beautifully at times can feel like droning when it appears everywhere. Third track “This is the Place” works on many levels and is likely destined for a future in HBO backtracks, but its running length exhausts what is special about it. Luckily, the track merges into its successor “Steady Glazed Eyes” effortlessly. While creating fluidity between tracks is vital here, discerning the two from that moment becomes difficult. As a result, each piece of the record contributes to the whole but most fail to impact independently. The record’s high point comes with “There is no Substance Between,” which pulls the curtain down for a moment to play with a more aggressive approach. Following suit is “Miss Emerald Green,” playing as an ode to rock from the 1950s. These standouts hold ground for the quintet, but are far and few between amidst their lengthy, occasionally monotonous counterparts.

The fact that Living Hour’s best moments are its louder ones does not bode well for the reverb approach often taken by the band. Overall, the record plays as a static haze appealing to fans of psychedelic rock. Its lack of variation, however, is its demise. Living Hour has shown it has potential to work past this, but with their self-titled effort, the ‘debut’ stamp lies front and center.

Robert Defina is an avid critic both on paper and in person. He spends more time writing album reviews than he does worrying about his future. He hopes that this sort of procrastination never grows old.
RELATED ARTICLES
album reviewslefse recordsliving hour
9.0