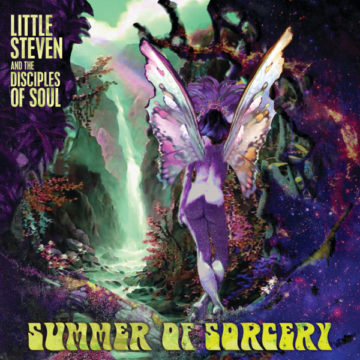 Summer Of Sorcery is the second studio album from Little Steven And The Disciples Of Soul. Their debut album, Soulfire (2017) was extremely well received, as was the tour in support of that album. You can hear highlights from that tour on the live set, Soulfire Live!, released earlier this year.

Whereas their debut album consisted of covers, the songs on this album were written by Little Steven, the first  of original material in over 20 years. It is a welcome return. Fans of his past albums  will remember his ability to write infectious melodies and strong lyrics. He also seems more at home arranging his own material and this allows for some very exciting moments on Summer of Sorcery.

Little Steven is backed by an incredible band, whose members have a great deal of experience. The fact that he brought them together is remarkable, and the band has stayed together following their first tour. They are again touring, in support of the album, and the show is well worth catching. Because he is working with such accomplished and experienced musicians, they can dip into the past with ease, and reference classic sounds and albums, and yet still distinctly sound like Little Steven. Listen to “Vortex”, the intro could be from 30 years ago and then Steven dips into an almost Spector sound. A brilliant combination of sounds. Spector meets disco. It works perfectly!

Summer of Sorcery is  the history of rock and soul on one album. Each track leads up to the last one, title track “Summer of Sorcery”, an eight-minute tribute to music and the impact it has had on Steven’s life, and by extension, ours. “I want to get lost in your festival/I want to be transformed by your summer of sorcery”, he sings. A love song, but also his homage to the music that he loves.

There are a many great songs on the album, and it holds together extremely well. This is an album, not a collection of songs thrown together on a Spotify playlist, but a genuine album. It is well-produced, and one that cries out for vinyl. Little Steven may not have been writing his own songs (he has written for soundtracks) for over 20 years, but this album clearly demonstrates that he has not lost his ability. He has written an album about love, faith, and musical history. It has a very positive vibe and, as far as I can tell, this is an album that the world needs.

Welcome back Little Steven, and welcome back your Disciples of Soul. Is it too early to hope for a volume three?

Born and raised in Whitby, Aaron discovered music through his love of The Beatles. This led to a career in radio, writing for various publications, and ultimately a radio show about The Beatles (Beatles Universe), which ran for over four years. When not immersed in music, Aaron enjoys spending time with the loves of his life -- his wife Andrea, and daughters Emily and Linda (all of whom have an intense love of music too).
RELATED ARTICLES
album reviewalbum reviewslittle steven
9.0