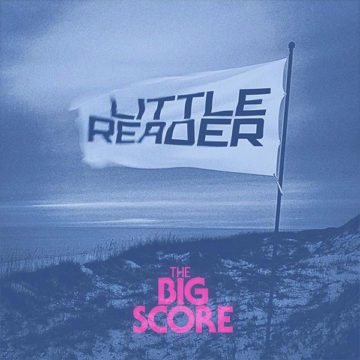 Little Reader is a pop duo consisting of , Kate Tucker (Kate Tucker and the Sons of Sweden) and Ross Flournoy (Broken West; Apex Manor).  The Big Score is the debut album from this new band .  Both are veteran songwriters and both have impressive track records, which also include soundtrack work for both television and film. Given their respective histories, this seemed like a logical and not an unexpected pairing.  The issue with this album is that it is not as good as it could have been.

That is not say the album is bad, and without charm, quite the opposite.  It just sounds too retro 80’s.  For the record, I am a big fan of the 80’s music scene.  But by 80’s artists, from the 80’s.  Not so much with bands trying very hard to emulate that sound.

Kate Tucker handles the lead vocals, for the most part, and while her voice is pleasant, she does not do a great deal with it.  She uses the same tone and style throughout The Big Score.  Think of a grown-up Clare Grogan, and you get the idea.  Actually the highlight of the album is “Strange Lightning”, when she shares vocals with Flournoy.  This creates more of their own sound, and is one song that is very emotional. The song serves as a discussion between a couple,  “I’ve been living through changes” Tucker sings, to which Flournoy responds “or are the changes scaring us to death?”   Tucker responds with “Well I guess I don’t know the answer to things like that”.  “Strange Lightning” is a very honest  and stirring moment during this album.  I only wish there were more songs like it.

The music, while played well, sounds like it came right from some left over tapes from a 1980’s band. Graham Belcher and Mark Waltrus provide suitable backing, but, again more could have been done with this back-up crew.  It should be noted that the production by Mark Waltrus (Gosling, The Shins to name just two on his impressive resume) is great and he does an excellent job making the record sound like it came out 30 years ago.

While the songs are melodic and easy to listen to, they do not offer a great deal in way of substance nor do the songs make their own way.  That would be one of the biggest complaints of the album, few tracks stand out and demand to be put on the system again.  A little more substance would have gone a long way with most of the songs.  But the songs where they do shine, they shine bright.  It makes me wish the whole album was like that.

Not the album I was hoping for, but not a bad album by any means.  Fans will enjoy it, and for young kids who want to experience the 1980s again, this is the place to visit.  I do expect bigger and better things from this duo in the future.