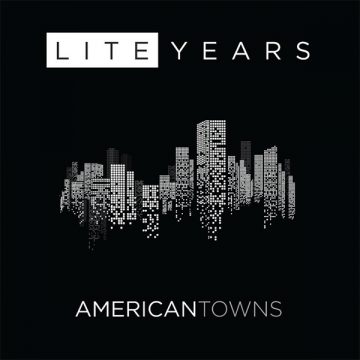 I do not know the rhyme or reason for the album title American Towns, the debut EP by the Toronto-based pop band Liteyears. However, the title is only one facet of the entire artwork that is a big-production EP.

The front of the album has a creative piece of digital artwork by Tyler Lucas of white skyscrapers disintegrating on a black background from the bottom to the top; this appears to be a hack at our friendly neighbours.

American Towns is Liteyears’ answer to the $50,000 grand prize they won from the Slaight Music’s “It’s Your Shot” competition. The album starts spinning and big band drums begin pounding together like a high school homecoming anthem.

All the music from the album was written and produced by the band with James Robertson as an additional producer. All of the lyrics were written solely by Brent Wirth, who plays keys, guitar, vocals and piano on the EP.

Each of the musicians within the band play anywhere from two to four instruments including vocals. It is very apparent that each of the members of Liteyears are very well-trained players, but their approach limits them. The problem with the album is that it takes a busload of loops and tracks for the band to play live. So why not just hire a local DJ?

The mashup of campfire Rock, boy-band harmonies, and computer programming may be compelling to some listeners. Nevertheless, looking beyond Liteyears’ boyish good-looks, you can see what is wrong with their album – the merit belongs to the production, and not the music itself.

With music giants such as Bob Ludwig and Vic Florencia helping to mix and master American Towns it is a surprise that the EP was not a more profound piece of work.

The music is forced and contrived, lacking natural flow and rhythm, but with today’s standards of music dwindling down to quickly processed, slowly digested waste — akin to that of a hotdog — it will not be surprising to see a hit come from American Towns.

Liteyears’ bubble-gum Pop may deceive Seventeen magazine and pre-pubescent girls, but it will not fool the average listener.

Robert Janes is a journalist and conversationalist from Guelph, ON. He wears his pants with a belt and most likely listens to the same music as your parents.
RELATED ARTICLES
album reviewliteyears
8.0