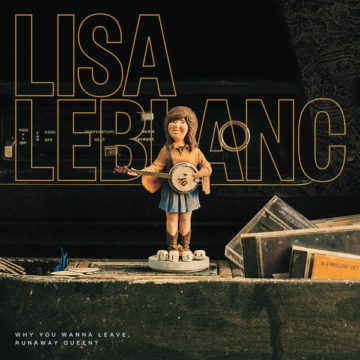 Lisa LeBlanc is the friend who gives you honest advice about dealing with your lame boyfriend and talking about life, but instead of over drinks, she’s dedicated an entire album.

She’s back with her second full-length album Why You Wanna Leave, Runaway Queen?, which has still has LeBlanc’s signature “trash folk” but with a bigger sound than her last EP, Highways, Heartaches And Time Well Wasted.

The album is chock full of personality, almost as if you met LeBlanc in person, you would feel as if you already knew her. Although she been a Juno nominee and her debut album was certified platinum in Canada, she has kept a raw sound that makes it seem like she’s still just a small town girl from New Brunswick rocking out.

The album was inspired by her trip to Louisiana where she learned about Cajun music and culture, specifically Appalachian banjo, bluegrass flatpicking and also learned how to square dance and do the Louisiana two-step. “Dead Man’s Flats” is a short one
minute song that showcases her new talents on the banjo and acts as a little break between lyrical tracks.

LeBlanc allows herself to be vulnerable throughout the album, especially during “”I Ain’t Perfect, Babe”, a slower and soulful track than the rest of the album, but she stays unapologetic about her flaws and fearless in addressing them.

She expresses a common feeling among those in their late 20s of confusion and emotion in “I Love You, I Don’t Love You, I Don’t Know”. It’s upbeat, fun and catchy and also briefly includes the vocal talents of fellow Canadian rocker Sam Roberts, but if you
if weren’t listening closely, you would his short backing vocals.

She’s a talented guitar player and it shows in the instrumental breaks during the album, specifically the softer ballad “Why Does It Feel So Lonely (When You Are Around)”. In the song, she opens up about a lost love, broken hearts and what could a relationship have been.

The album also includes an energetic cover of Motörhead’s 1980s rock anthem “Ace of Spades”, because of its positive reception during LeBlanc’s live shows.

Why You Wanna Leave, Runaway Queen? has a great mix of tracks that make a coherent story that the average young adult can relate to. If you’re interested in getting to know Lisa LeBlanc or just need to let off some steam some foot tapping folk music, this album might be for you.

Josie is a student in her third year of Journalism at Ryerson University in Toronto. She loves going to concerts, exploring the city and often indulges in an endless stream of cat videos. She is also minoring in politics, but is completely unsure why.
RELATED ARTICLES
album reviewslisa leblancwhy you wanna leave runaway queen
8.0