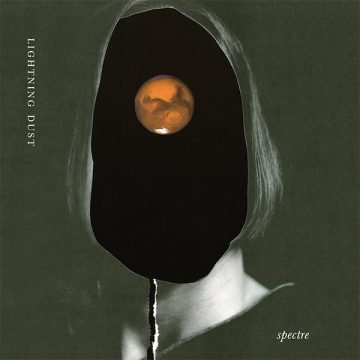 After a six-year hiatus, Vancouver-based duo Lightning Dust return with their fourth album, Spectre, a beautiful, haunting, dreamscape of songs.

The opening track “Devoted To” is a swirling, ominous,mood-setter for the rest of the album, parts of which had me thinking of fellow electronic duo Boards of Canada with its android, edge-of-the-world bleakness, but the remainder of the album’s arrangement reveals a breadth of other styles as well.

Tracks range from the driving, indie rock style of “Run Away” to the somber country-tinged songs like “Led Astray”and “A Pretty Picture” to beautiful piano ballads like “Inglorious Flu” and “When it Rains”, all of which are threaded with the electronic elements that are a feature of Lightning Dust’s previous work.

The closing song “3am/100 Degrees” bookends the album well and comes in at over seven minutes. As a dark space jam, it rises and rises in intensity until finally collapsing into a slow, beautiful, serene trance-like state that acts as an effective moment of catharsis to conclude the album.

The result of all of this is a beautifully-conceived album that is ghostly and reflective, with lyrics and an atmosphere that evoke the dreamy feeling of finding oneself stuck in the wrong place and struggling to get out of it. The stillness of the ending suggests that escape or transcendence is a possibility and here punctuates a very fine new piece of musical art from Lightning Dust.

Dan Kennard is an English teacher and fiction writer living outside Kansas City, Kansas where he lives with his wife and children. More about his work can be found at amazon.com/author/dankennard. You can also follow him on Twitter and Instagram @kennardistry or contact him at kennardistry@gmail.com.
RELATED ARTICLES
album reviewalbum reviews
10