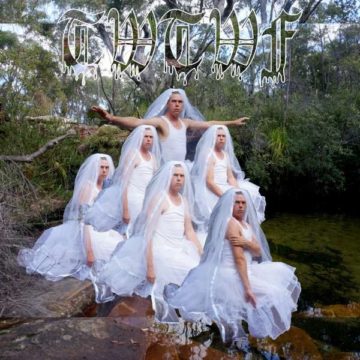 Titles With The Word Fountain (TWTWF) is the eighth studio album by Liars. The 17-track LP was recorded alongside Liars’ previous 2017 album, Theme From Crying Fountain (TFCF) and stands as a companion piece, with both albums appearing in full on the TWTWF Deluxe Edition.

There is something about the artistic direction of this album that makes it at first hard to settle into. There is a chilling weight that itches at your ears, giving them an uncomfortable spook. Needless to say, this work is an unusual one, but one definitely worth the listen.

The heavy kick and waviness of the first quarter of the album, especially the single “Murdrum,” are what I want to be bumping in the club when it’s last call and I’m sort of seeing double. There is a great trace vibe among these first tracks, but the rest of the album is not as high energy.

After an odd dialogue snippet to introduce “Double Elegy,” the songs take on a moodier and grimier sound. There are some samples that are questionably too edgy and verge on Halloween-esque, with maniacal witchy laughs and stabby synths that are reminiscent of ‘80s horror movies.

Arguably, TWTWF does feel like some of it was leftover material that didn’t make the cut for TFCF. As a standalone, though, the album does have some high points, transporting audiences into a house of mirrors that they didn’t expect to be standing in front of.

Mackenzie is a writer and mosh enthusiast from Kitchener, Ontario. Currently travelling and working in British Columbia with her van, Delores.
RELATED ARTICLES
album reviewalbum reviewsliars
7.0