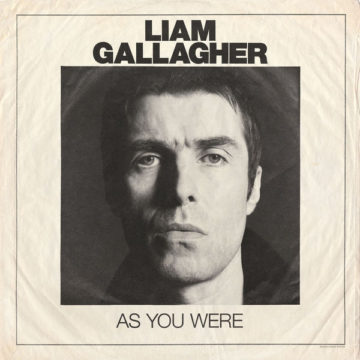 Liam Gallagher
As You Were
Warner Music

I’ve always found the machinations of the Gallagher brothers intriguing, and so when I had the opportunity to review this latest album by lead vocalist Liam, I jumped at the chance to find out what he’s been up to lately.

After disbanding his project Beady Eye with former Oasis members in 2014, Liam floated between projects before teaming up with producers Greg Kurstin and Dan Grech-Marguerat in two separate sessions at Snap Studios in London.

As You Were is a brilliant album, far superior to anything done with BeadyEye, and destined to hit #1 this week on the UK charts.

Starting with the opening track “Chinatown” and moving on to the rocking single and video ” Wall Of Glass” to “Bold” and” Greedy Soul,” Gallagher shows flashes of genius, and why he’s come up with one of the savviest discs of the year. A song worth mentioning on the 15-track album includes “I’ve All I Need,” which particularly highlights his distinctive vocal style and may really be the best song on the album.

Other key cuts include the mid-tempo “When I’m In Need” and the rocker “You Better Run.”

This isn’t a perfect album, but it’s not far from it.

Here's what we think...
Spill Rating
Fan Rating
Rate Here
New Criteria
10
8.9
9.0
Total Spill Rating
8.9
Total Fan Rating
4 ratings
You have rated this
Album Reviews
album reviewsas you werefor what it's worthliam gallagheroasiswarner music
album reviews, as you were, for what it's worth, liam gallagher, oasis, warner music
About the Author
Gerry Young

Gerry Young is President of Current Records and Management, and author of the 2011 biography Pop Goes The Weasel: Rock And Roll Off The Record, available at Indigo/Chapters, Barnes & Noble, and Amazon.com. He has recorded and managed Juno Award winning bands Martha And The Muffins and The Parachute Club among others.
RELATED ARTICLES
album reviewsfor what it's worthliam gallagher
9.0