SPILL ALBUM REVIEW: LEONARD COHEN – THANKS FOR THE DANCE 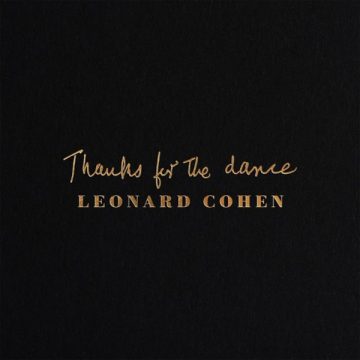 Leonard Cohen
Thanks For The Dance
Sony Music

There is not much more that can be said in praise of Leonard Cohen’s posthumous album besides the fact that it is a dizzying emotional masterpiece.

Omnipresent throughout is the knowledge that, just prior to his death, Cohen left instructions for his son Adam to complete the album. Adam compiled his father’s vocal recordings atop arrangements of his own creation in order to create one last oeuvre from Cohen. This detail alone establishes a beautifully poignant experience for the listener.

Subtle yet passionate lyrics dance over very Cohen-esque styles of instrumentation. Only his words can weave such personal tales featuring everything from religion, to sexual imagery, to nostalgia, to war – all delivered with reverence in his signature gravelly voice.

His imagery is transcendental, and his regular use of the second person – ‘you’ – creates a relationship with the listener, as if he is speaking through the record, and he holds their attention rapt for its duration.

To say there are highlights on this album would be redundant. Every carefully crafted lyric is a drop of water in a pool of beautiful metaphors. He entwines his lyrics with the love and care of a wordsmith.

A celebrated musician, poet, and author, he remains a man Canadians are fiercely proud of. Upon listening, it’s possible to picture Cohen still there, in his downtown Montreal apartment, watching passersby. Lines in “The Goal” speak volumes:

“I sit in my chair, I look at the street/
The neighbour returns my smile of defeat/
I move with the leaves, I shine with the chrome/
I’m almost alive, I’m almost at home.”

Thanks for the Dance offers the inkling that he hasn’t really left us, and musically, he hasn’t. The legacy left behind is staggering, and through it, he will be remembered until the end of time.

SPILL ALBUM REVIEW: LEONARD COHEN – THANKS FOR THE DANCE