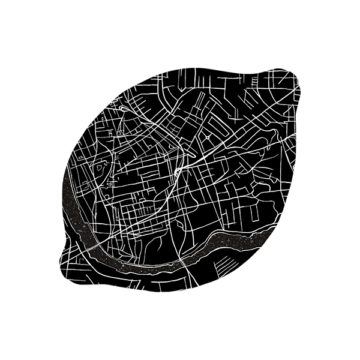 Lemon Bucket Orkestra
If I Had The Strength
Outside Music

“We start in a musty train car overlooking the fields and valleys of our youth through permanently smudged windows, reflecting on the life that once was and wondering how to face our mothers with the horrifying fact that we will never be the beloved boys we once were,” Mark Marczyk says, expanding on the album’s concept. “Then, with a sudden jolt and flicker of the cabin’s spotty electricity, we’re transported to a memory of what led to this moment and we’re sprinting for dear life in a struggle to keep up to our past selves. The whole album navigates between the shaky cabin and these flashbacks in the language of eastern European folklore, the main site of resistance and celebration for the Lemon Bucket Orkestra for the better part of the last decade.”

If I Had The Strength starts out with the muted trumpet and orchestral motifs of “The Game.” It quickly spirals into the high-energy song, “Crooked,” setting the tone for another raucous album by Toronto’s most original creators, Lemon Bucket Orkestra.

If I Had The Strength also features Canadian soprano, Measha Brueggergosman on “Heroes,” Montreal-based Latino rapper, Boogat, on “Palinka” and closes with Choir!Choir!Choir! reading the late Adrienne Cooper’s Sholem – a piece that Lemon Bucket Orkestra had their audience read at their New Year’s Eve concert.

Two years in the making, Lemon Bucket Orkestra’s third album also draws from traditional folk repertoires across Eastern Europe. But unlike Moorka (2015) and Lume, Lume (2012), If I Had The Strength is built around an overarching narrative “about coming home, about never being the same, about the parts of ourselves we lose, the parts we gain, and about the prisons we inhabit or that inhabit us.” It’s a song cycle, inspired by a century old Slavic prison ballad “that tells the story of a young rebel coming home after laying it all on the line.”

“The album is a statement of resistance and celebration,” says Marczyk. “We’re guerrilla-folk party-punks imprisoned and liberated by Eastern European folklore. The title track (borrowed from the late great Adrienne Cooper) says it all: If I had the strength, I would run in the streets – I would scream PEACE! PEACE! PEACE! This album records the process of gathering that strength and the obstacles we encounter along the way.”

If I Had The Strength draws from the band’s personal connection to the Ukraine-Russia conflict, making it emotionally raw. At the same time, however, it retains its boisterous, “party-punk roots and attitude, developed and honed while busking on the streets of Toronto and around the world.”

Stylistically, “Crooked” whoops and hollers amid male and female vocals, fiddle, clarinet and enthusiastic cymbal claps that immediately recall Lemon Bucket Orkestra’s high-energy live performances. “Soldat” features a familiar rhythmic motif heard in some pop songs (I’ll leave the guessing to you) and “When” moans a story that draws you in. “Palinka” moves continents together.

Lemon Bucket Orkestra will launch an 11-date album release tour across Ontario and Quebec starting November 1, 2017. Additional Canadian dates will be announced for Spring 2018, covering the country from coast to coast.

Talia Wooldridge is an avid music lover, composer and ethnomusicologist who contributes artist interviews, live concerts, festivals and album reviews for Spill Magazine. She has written extensively on the intersection of music, personal identity and cultural symbolism with an early focus on Latin American Hip Hop and female Cuban rappers. In her spare time, Talia writes, composes music and manages Music Can Heal, a non-profit that brings live, award-winning musicians to inspire healing in hospitals, hospices and communities in need. Her next project is an interactive music-travelogue exploring music cultures and music travel around the globe. Follow her here: www.taliawooldridge.com + www.movetoyourownbeat.com.
RELATED ARTICLES
album reviewslemon bucket orkestraoutside music
8.0