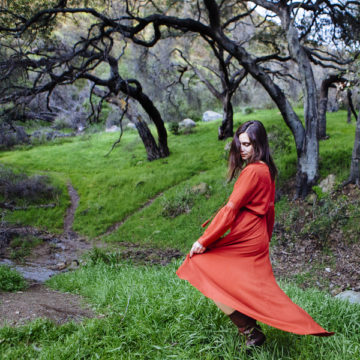 Leeann Skoda has been recording since 2014. Call Me Back Home is her third album, and her first since 2015’s Didn’t We All. It is also her first for Big Ego Records, a label created by Chris Schlarb (of Psychic Temple fame).

This is old-time country with Skoda’s stamp on it. This means it does sound old(ish), but it is also very contemporary, if not futuristic. Futuristic in that she is providing a new path in the country music genre that many may follow. She has the ideal voice and she has written some fantastic songs straddling many genres. Call Me Back Home has traditional roots, but one cannot help but feel when Skoda comes home her family may be in for a bit of a surprise.

Listen to songs like “On the Slide,” a fantastic melody that owes something to those who came before, but when she throws in her lyrics, you know you are in new territory. “Under the gun now, nothing good can last,” she sings. It is not your traditional fare, nor is it “country pop.” While she sings, fellow Big Ego Records friend Philip Glenn provides emotional violin/fiddle playing. It is a truly awesome combination.

Credit must be given to Chris Schlarb, who plays on the album but also mixed and produced the album. He also wrote the song noted above, “On the Slide,” which is one of the many highlights.  Schlarb treats each song individually and address the needs of each song. And yet he is able to bring together a coherent and consistent-sounding album.

Helping her out on this record are some fine players. The previously-mentioned Philip Glenn, and Joel Martin on pedal steel deserve special attention. Jessie Payo provides fantastic vocals and matches Skoda perfectly on the traditional “Up Above My Head.” The energy on the song is fantastic, and one can feel it coming through the speakers (or headphones).

Although she is a fine musician, it is her voice that is so irresistible. She has more emotion and power in her voice than anyone else recording “country” now. It is simply astounding to listen to her.

If country had continued to progress from its creative peak in the 1970s, it might sound like Skoda. Rather than the urban cowboy of the ’80s and the introduction of the country pop of the ’90s until now, she has decided to continue the path laid out by the true mentors. And yet she puts her own stamp on it as well.

Call Me Back Home is a near-flawless album, and will be on my turntable many times in the near and distant future. Excellent work.

Born and raised in Whitby, Aaron discovered music through his love of The Beatles. This led to a career in radio, writing for various publications, and ultimately a radio show about The Beatles (Beatles Universe), which ran for over four years. When not immersed in music, Aaron enjoys spending time with the loves of his life -- his wife Andrea, and daughters Emily and Linda (all of whom have an intense love of music too).
RELATED ARTICLES
album reviewsbig ego records
8.0