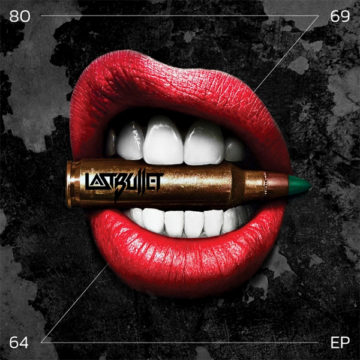 Toronto’s premier rock & roll outfit Last Bullet has released their third EP, 80-69-64, their follow up to 2012’s Love. Lust. Illusion. While the album is officially released today on July 14th, fans who attended their pre-release party at the Phoenix Concert Theater on June 17 had the opportunity to hear much of the album performed live, as well as being able to purchase a physical copy of the record a month ahead of its official release. To properly set the tone of this review, I have been listening to the record on fairly constant rotation for the last month and it has yet to lose its excitement; ultimately, 80-69-64 is one of the best albums I have heard from an up and coming band. Ever.

Now that my overall thoughts regarding the album are out there, let’s look at what makes 80-69-64 such a stand out album. For starters, Last Bullet is an incredibly tight band whose ability to write catchy songs without sacrificing their hard hitting quality is something to admire. “Bright Lights” and the opening track “Sin” immediately come to mind when thinking of how heavy and catchy the band can get. Both songs are fueled by thick and distorted guitars from Brendan Armstrong and Michael Silva, and driven by the pulsing grooves of drummer Chris Galaz and bassist Will Shannon, only to be topped off by the bellowing voice of Bryan Fontez, who sounds as much like Steven Tyler and Axl Rose as he does Scott Weiland and Layne Staley. Much like that collection of iconic singers, both “Sin” and “Bright Lights” capture a conflicting sense of glitz and darkness which further makes both tracks feel far more compelling.

“Southern Lips” stands out as the sexiest song on the record and as a reminder that while rock has taken many shapes since its rise to popularity, the genre has often been at its best when it evokes an array of lust filled imagery. “Southern Lips” is no different as it glorifies what rock was built upon: sexual fantasies so filthy that they’d make even the most conservative grin. The track is probably the most influenced by classic rock bands the likes of the Stones — largely due to its slinky lyrics and rhythmic and crunching guitar riff. The album’s closing track, “Little Miss Filthy” offers a similar lyrical theme, rather than glamourize the simple pleasure of a woman’, delivered in a sonic explosion straight from the ’90s hard rock scene of California and Seattle. These two tracks are a reminder of just how well Last Bullet straddles the worlds of classic rock from the 1970s and ’80s, and alternative hard rock from the ’90s.  While it is easy to write them off as a direct offshoot of the 1980s glam metal scene, to do so would mean ignoring a major part of their song writing style and choice of textures that denote the band as a synthesis of many, albeit often conflicting influences, which gives them a very distinct and modern sound, something which often feels lacking in many of this generation’s rock ‘n’ roll artists.

If 80-69-64 is any indication, the mantra of sex, drugs, and rock ‘n’ roll is not dead, it has simply moved to Toronto. There is not a song on the record that is less than great, and to choose one track which outshines the rest would be a difficult feat. The only thing I could ask for is more: the six tracks, while lengthy for an EP, will leave fans, old and new alike, desiring more. This is largely because the songs are written so well, and have been through the ringer to ensure that each track demonstrates an attention to detail which makes every song stand out from the next. Whether it be the rhythmic pauses in “Gimmie Time”, or the building feeling of “Sin”, it is quite apparent that 80-69-64 was a labour of blood, sweat, and tears. While many young bands strive to make rock records, very few will deliver a record with half as much conviction, attitude, style, and musicianship that builds upon the legacy of such iconic rock legends, in a manner which can stand beside their heroes as their contemporaries and revolutionaries to the style, a true bridge between rock of the 70’s, 80’s, 90’s, and present.  That is what makes 80-69-64 such an outstanding record from a band that is as entertaining to watch and listen to as their influences.

A passion for music has always been a part of Gerrod’s life. As a young boy, he was raised on a steady diet of the music from The Chili Peppers, Aerosmith, The Stones, Prince, and others from his mum. Raised in the GTA, Gerrod continued to foster his love for music by attending a wide range of concerts and learning the drums. His unapologetic passion for music has no bounds and has spread to a wide variety of styles, whether it be the 90’s rock that sound tracked his teenage years, the jazz he studied in university, or his newfound love for hip-hop. He recently received his bachelors in music and education from York University and is passionate about writing and reviewing good (and less than good) music. Gerrod is also the drummer and songwriter for a Toronto based rock & roll band, One In The Chamber.
RELATED ARTICLES
album reviewslast bullet
9.0