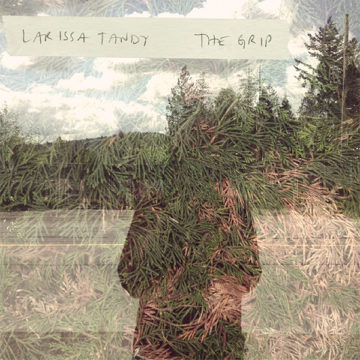 The Grip is Larissa Tandy’s debut solo album.  Actually it is a wonderful title for this album, because it has so many interpretations, much like the songs inside the package.  Larissa  has earned a name for herself by playing many gigs in her native Australia, both as a solo artist and with The Strine SIngers (with whom she did issue an EP).  The Grip  (on Thalassophile Records) is her first chance to commit to vinyl her unique brand of folk/pop fusion.  Since recording this album, she has left her her home of Australia to take up residence in Canada.  Canada’s gain is Australia’s loss.

Producer Jim Bryson (Kathleen Edwards, Kate Maki, Sarah Harmer) pulled together a host of some of Australia’s top musicians and the result is  a very listenable album.  The true beauty of the album is that, although she has her own distinct voice and sound, the album twists and turns and takes the listener into different sounds and audio textures.  All the while, Tandy provides beautiful melodies and truly beautiful lyrics that read as poetry.

The exquisite acapella vocals of the opening track “Of Friendly Fire” to the closing notes of “One Request”, you are taken on an incredible personal journey interwoven with sometimes sparse arrangements (“My Mother’s Boyfriend”, which is one hell of a chilling song), but then at times bordering pop (“Harder Heavier”).  Her arrangements suit each song.  In some regards, listening to this album I kept thinking, if Patti Smith recorded an Americana album, it might sound something like this.

Having said that, her influences do not come out through the album.  She does have her own sound and she does have something to say.  It will be interesting to see what she comes up with now that she is residing in Canada and touring the country in support of this album.  Perhaps the next record will be reflective of a more sedate and calmer period of her life, or she can write about leaving her homeland.  Whatever she decides to do, I will be looking forward to the work.

Born and raised in Whitby, Aaron discovered music through his love of The Beatles. This led to a career in radio, writing for various publications, and ultimately a radio show about The Beatles (Beatles Universe), which ran for over four years. When not immersed in music, Aaron enjoys spending time with the loves of his life -- his wife Andrea, and daughters Emily and Linda (all of whom have an intense love of music too).
RELATED ARTICLES
album reviewsgood thing
8.0