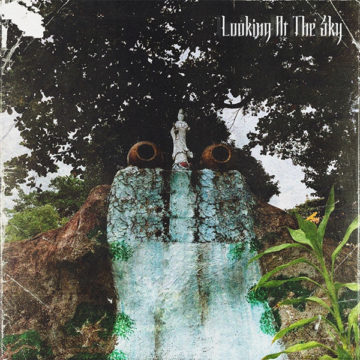 Looking At The Sky is Lofi Laffey’s third album this year. One of the advantages of being totally independent is that an artist can release the music he or she decides. Laffey records and releases music very quickly, and what this does is it allows the listener to hear an artist grow but it also serves as an audio diary for any artist. However recording and releasing albums quickly does not mean there is any lack of quality. The opposite is true. Laffey just keeps getting better.

As with his other albums, Looking At The Sky is an instrumental, ‘lofi’  album full of keyboard-based melodies. Andrew Laffey is the sole member, and he produces and engineers his own work.  He uses beats to accentuate the overall atmosphere of the song, and the end result is an album with a consistent, yet diverse sound. Compare “Cafe Patio”, with his excellent use of sounds to the opening song, “Looking At The Sky”. Both have a similar base but the execution is very different.

Lofi is a genre of music that can be problematic. If not done well, it can be boring and hard going for the listener, but when done well, as with Laffey, it becomes fascinating and keeps the listener’s attention. Laffey relies on his own sensibility and ears to know what is working and what is not. His years of working and producing other artists has assisted him with this skill, and on Look At The Sky, it is very evident.

This is a brilliant album. In a sense it needed to come out for the autumn, as it feels like the fall. One does achieve the feeling of being outdoors, lying back at looking at the sky on a cool, crisp day,  as one listens to the album. It really is an album of observation, and it works on all levels. Laffey creates strong melodies from what seem to be simple ideas, and this may be his genius. One does not need to work hard at listening or enjoying  his music, but if one does, one is rewarded.

Looking At The Sky is a brilliant album. Short (seven songs) and to the point. He does not utilize frill sounds, nor does he take his music where it should not go. He simply plays it, adds his magic and mixes it all together. Not to put pressure on him, but given the three albums he has released thus far this year, one can only imagine what else is up his sleeve. I will listen to this, as well as his previous albums, while I wait.

Born and raised in Whitby, Aaron discovered music through his love of The Beatles. This led to a career in radio, writing for various publications, and ultimately a radio show about The Beatles (Beatles Universe), which ran for over four years. When not immersed in music, Aaron enjoys spending time with the loves of his life -- his wife Andrea, and daughters Emily and Linda (all of whom have an intense love of music too).
RELATED ARTICLES
album reviewalbum reviewslaffey
8.0