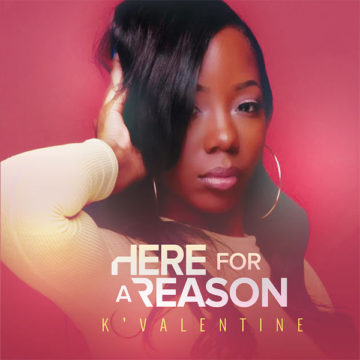 That album title is not just conceit – it  recalls K’Valentine’s near fatal automobile accident on I-94 one Sunday evening back in September 2015. Thankfully – and somewhat miraculously – she was unharmed and able to carry on her hip-hop/rap career, ultimately using the event for inspiration. Inspired by a chance meeting with Maya Angelou, she started out writing poetry, which she then turned into song lyrics; she had put out a couple of mix-tapes (the first in 2011) before a bit of self-promotion brought her to Talib Kweli’s label for this debut CD album. K’Valentine’s lyrics are positive and thoughtful, uplifting messages, with a focus on empowering African-American women (though not to the exclusion of others) with her beats and her delivery richly varied, showing some influence from Tupac Shakur, of course – she listened to him as a little girl and names him as an original inspiration.

Despite her pride at being a native Chicagoan, she sings with pride of ‘Atlanta’, includes little vignettes on tracks like ‘Intro’ and ‘Family’, and she draws in guests such as Niré, B.J. The Chicago Kid, Scotty ATL, Kendra Ross, and Talib himself on the powerful ‘Us’, a recitation which hints perhaps at some of the poetry K’ used to write. Although she can occasionally be tender and gentle, she can get as down and dirty as any other rapper, and her rhymes are strong – very strong. Verbally, she gives as good as she gets, as you would expect from a successful female in the mainly male-dominated world of hip-hop, and her own take on the music is young-sounding and fresh. Check it out. And if you want to know how confident she is, lend an ear to ‘Award Show’ – she’s already written and recorded her own Grammy acceptance speech, not without some justification on this evidence.

The Spill Magazine is a Toronto-based online publication dedicated to covering the independent music scene with a strong focus on our thriving hometown talent. Our writers bring you up-to-date news, in-depth features on musicians and reviews for the latest CD releases. We also travel to the front lines for all local festivals including Canadian Music Week and North by Northeast. Don’t forget to check out our Facebook and Twitter pages for all daily Spill updates.
RELATED ARTICLES
album reviewssheus
9.0