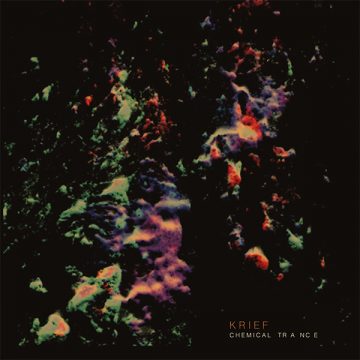 Patrick Krief, simply known as Krief, has been prolific as of late. He had released his best to-date body of work, Dovetale, in the summer of 2019. Now, in just a sliver over a year, Krief has outdone himself and delivers us Chemical Trance, the Montreal artist’s sixth solo LP.

Chemical Trance builds upon Krief’s impressive repertoire in a fashion that expands the experience of the listener and represents a unique growth in Krief’s alternative pop rock sound with the addition of a more complex mix of psychedelic rock.

The album absolutely bursts forth with the opener “I Am The Pillar Of Darkness In Your Life”. The progression of the first single builds gradually to a satisfying guitar climax which displays Krief’s musical chops unlike ever before.

“The Light Between Your Eyes” is quite something to behold. It slowly begins with a Pulp and Bloc Party feel, before it kicks into high gear, reminiscent of a mixture of Krief’s distinct dulcet tones with a dose of Hendrix/Page/Steppenwolf-inspired guitar. The late-‘60s/early-‘70s vibe is heavy with this one and it really is the shining jewel of the album.

The second single, the piano lullaby “Never Without You”, brings upon a heartfelt and melancholic reflective mood of yearning for a departed loved one. It emotively winds down the intensity of the album before the atmospheric outro “Gyp Million Star” closes things out.

Krief’s self-produced and mixed Chemical Trance is a must-listen-to album, and certainly will make the personal and critic best-of lists of many. The only potential issue with Chemical Trance is the duration of 34 minutes is limited with the only solution being that of listening to the album on repeat.

John Graham is a Vancouver-area resident who typically spends most days admiring music of all genres. When not listening to music, John is usually at a live show, somewhere in the bowels of Vancouver.
RELATED ARTICLES
album reviewalbum reviewsindica
9.0